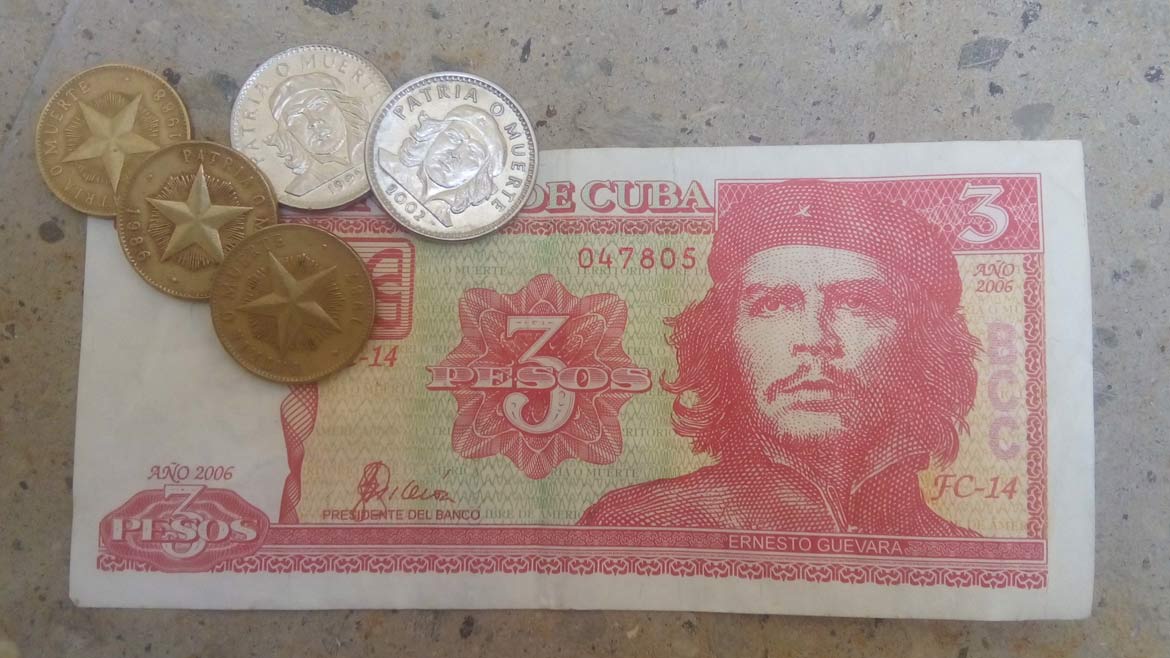 If you’re traveling to Cuba, you may have wondered how you can make your money go further by fully understanding the Cuban currency system?

By the time we arrived in Havana at the start of our month-long journey around this unique Caribbean island nation, we had done plenty of research.

One of the most intriguing things we had found out was that Cuba has two currencies.

The most widely used by foreign visitors is the Cuban Convertible Peso. Its currency code is CUC, which earns it the nickname “kook”. When asking about prices you will often be told, “It’s 25 kook for the night, and 5 kook each for breakfast.”

The CUC is pegged to the US dollar at a 1-to-1 fixed exchange rate, but when changing other currencies to CUC there is an extra 3% conversion charge on top. Depending on your bank and the fees they charge, 100 kook will cost you US $103, plus fees.

US citizens should also be aware that the USD also attracts an extra 10% charge to exchange to CUC. This means that USD $100 will only get you about 87 CUC. If you are heading to Cuba with USD notes it may be worth changing them to another currency before arrival – perhaps Canadian Dollars, or Euros. You will lose less doing this than paying the hefty extra 10% fee.
Thanks to Peter from CubaUnbound.com for this reminder – see comments at the bottom of this article.

The other currency in regular use in Cuba is the Cuban National Peso, which has the currency code CUP. These pesos are sometimes referred to as “moneda nacional” – national money – or more often they are simply called pesos. 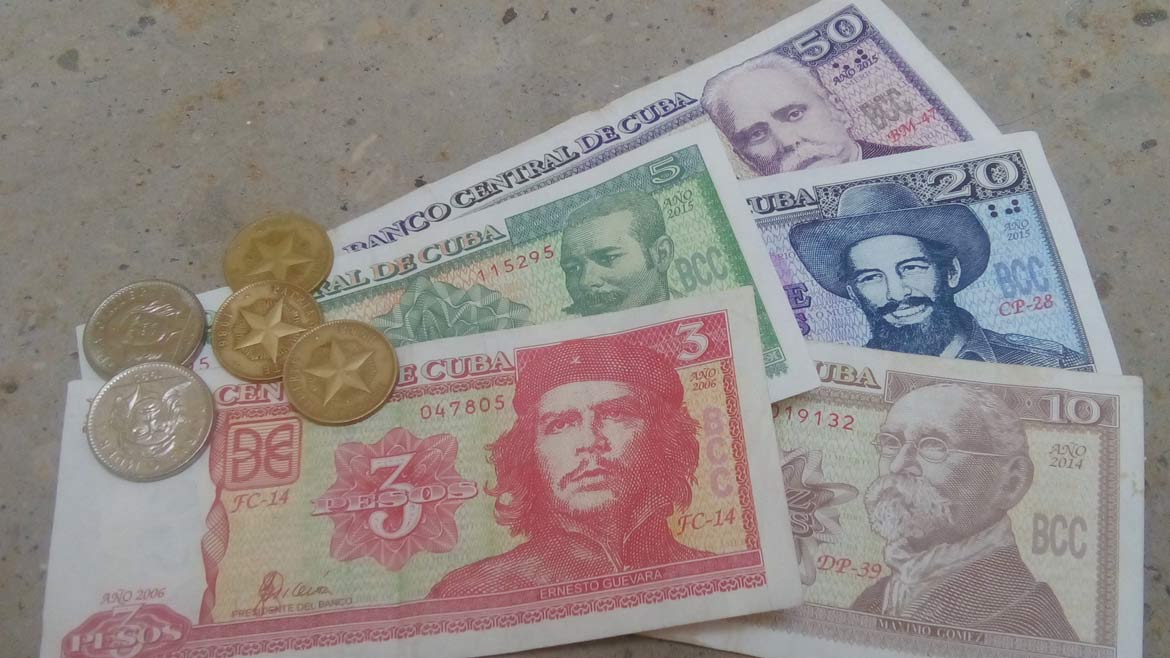 Getting hold of local pesos will completely change your experience of travel in Cuba. It will also greatly help your budget too.

When quoted a price, if you are unsure of the Cuban currency being referred to, the question, “Kooks or pesos?” will receive the appropriate answer.

CUCs, kooks, are sometimes referred to as tourist money, but they are widely used by locals too, particularly in cities. CUCs and CUPs can both be used in many shops, and there is a fixed exchange rate of 25-to-1. One kook is worth 25 national pesos.

We asked our host in Havana if we needed local pesos, and where we could get them.

She just laughed. “They won’t be any use to you.” She was right to some extent, as in Havana there are very few places that tourists would need pesos. Everything is priced in kook.

Where to get your Cuban currency on arrival at Havana Airport

You can get your Cuban currency (CUCs) in the airport at Havana when you fly in. Head upstairs from the Arrivals area, where you will find 4 ATMs and a couple of currency exchange windows. When we arrived, there were lines of people for the windows, but if you have a cash or credit card it was easy and quick to withdraw local currency, ready to pay your taxi fare to the city centre.

How and where to get your local Cuban pesos

It turned out to be relatively easy to get our hands on the local Cuban currency or pesos. You have to find a “casa de cambio” – a money changer – which is referred to as a CADECA in Cuba (CAsa DE CAmbio).
Thanks again to Peter from CubaUnbound.com, who suggests all banks will change CUC to CUP. We only used the CADECAs, where I was never asked for my passport. You may need your passport at the bank.

We found them easily in all towns and cities by using the MapsWithMe app on our phone. This is a wonderful offline map tool which doesn’t require any internet connection because you can download maps for offline use for any country in the world.

You can read all about MapsWithMe in the March 2017 issue of House Sitting Magazine. 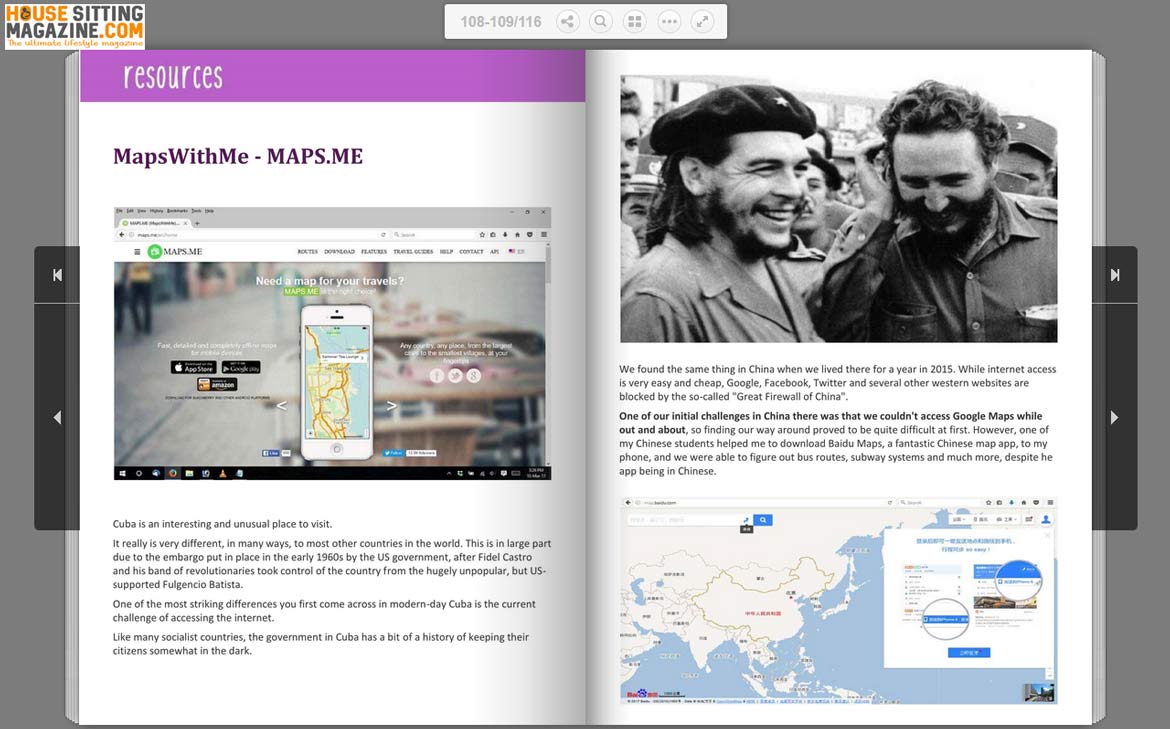 MapsWithMe is a fantastic travel app – download maps for offline use when you have no internet connection, or want to save on data costs

See the bottom of this article for links to our (free) Android and Apple magazine apps.

At the CADECA you will receive 24 pesos for one kook. If you are changing pesos back in the other direction, it costs 25 pesos to buy one kook, hence the official rate of 25-to-1.

When you change 10 or 20 kook you receive a huge bundle of notes, and suddenly feel very rich. And in a way you are very wealthy! Because having pesos in your pocket really is the key to unlocking the Cuban currency code.

Where can I use my local Cuban pesos?

As you get further from Havana, and further off the well-worn tourist trail, you will discover more and more opportunities to use pesos rather than kook.

As most regular Cuban workers are paid in pesos, many restaurants, food outlets, coffee shops and more price their wares in the local currency. We also used local trains a couple of times, paying the standard local rate. And prices are amazingly cheap!

Food at the locals beach at Caibarien is great value – if you have local pesos in your pocket. Filete de pescado – fish fillet – for 19 pesos… that’s less than a dollar!

Here are just a few examples we discovered (NOTE: 1 peso is worth about 4 US cents / 3 UK pence): 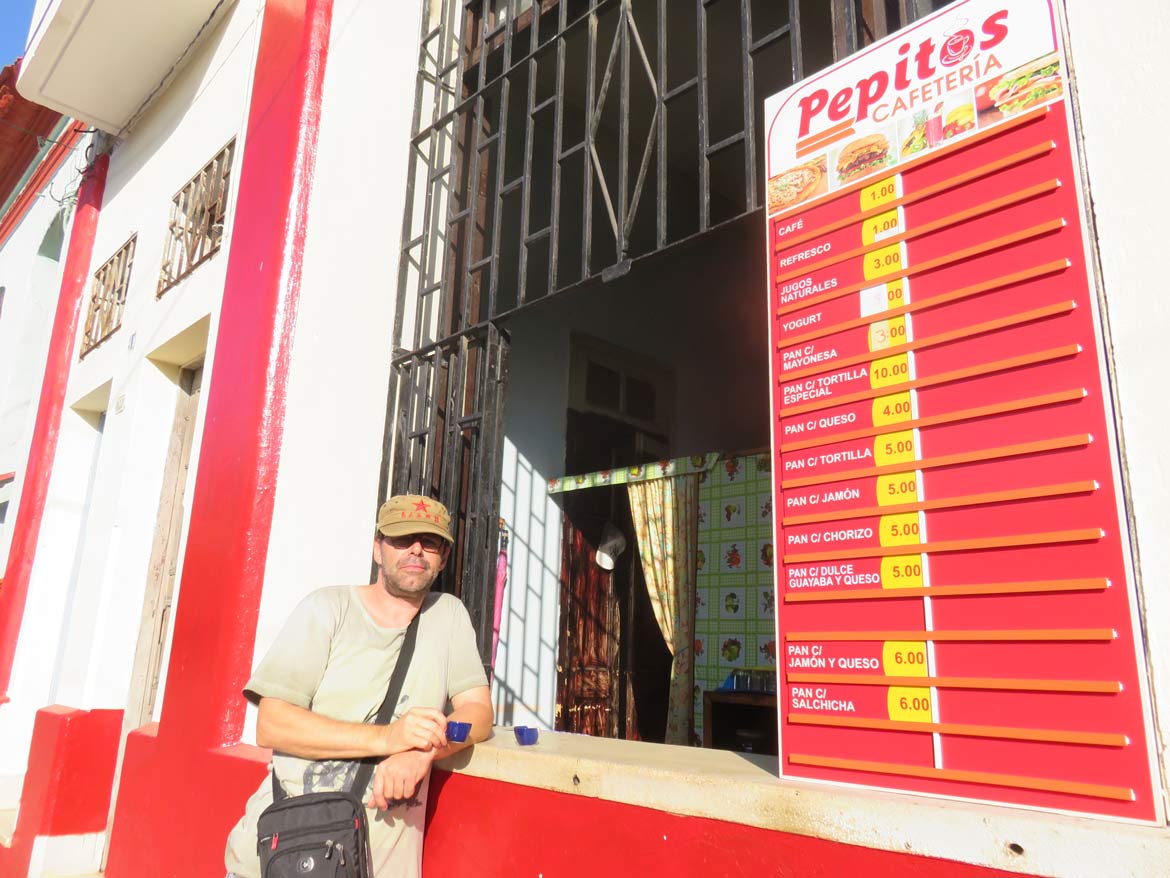 If you don’t have local pesos in your pocket, many of the smaller vendors will simply ask the same price in kook. We saw this happen in the town of Vinales, where we discovered a big line of locals buying ice cream at an open window.

As we joined the queue I looked at what others were paying, and quickly figured out that each cone with its huge scoop of soft ice cream cost one peso. I had two coins ready to pay, and they were accepted without question. 4 cents each.

As we ate our tasty treats quickly in the hot sun we saw another tourist pay at the window. She was asked for two pesos, and paid with a 5 CUC note. She got 3 CUC change. Her ice creams had just cost twenty-five times more than ours!

Tips for making the most of the Cuban currency system 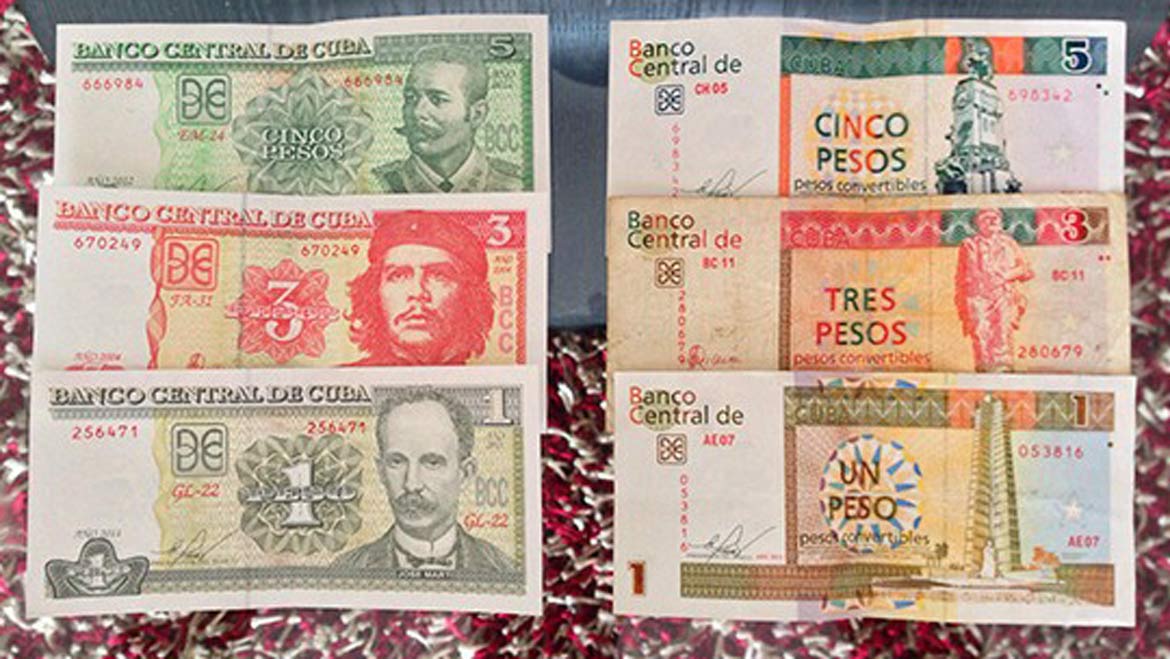 One country, two currencies – National Pesos on the left, Convertible Pesos on the right – don’t mix them up, one is worth 25x the other

As we planned to be in Cuba for a month, we knew that we would have to budget carefully. We found that by always having local pesos on hand made it possible to eat on many occasions at extremely affordable prices.

So if you are heading to Cuba any time soon, make sure you crack the Cuban currency code, and experience some of the more local flavours of the Cuban lifestyle.

You may have noticed that the local 3 peso note features the iconic image of revolutionary hero Che Guevara.

NOTE: You can learn more about Cuba’s fascinating revolutionary history in this post:

Why Che Guevara would be ashamed of Cuba 2017

At many of the touristy sites around the country you will find a wily local who will try to sell you one of these popular notes.

The price might start at three kook, but be discounted down to one kook if you haggle well.

When you start using your national pesos you will receive these notes naturally in your change. There are plenty of them in circulation.

They are worth about 12 cents, so paying the equivalent of three dollars for one represents a very hefty mark-up.

Simply say, “Ya tengo,” – I already have – and the vendor will move on to less knowledgeable prospects.

How important is Spanish when using local pesos?

We SERIOUSLY suggest you learn the basics of Spanish before heading to Cuba.

If you want to get the most out of the dual Cuban currency system, then you need to be able to communicate, at least at a basic level, when you go to the local eateries, or try to buy a train ticket. 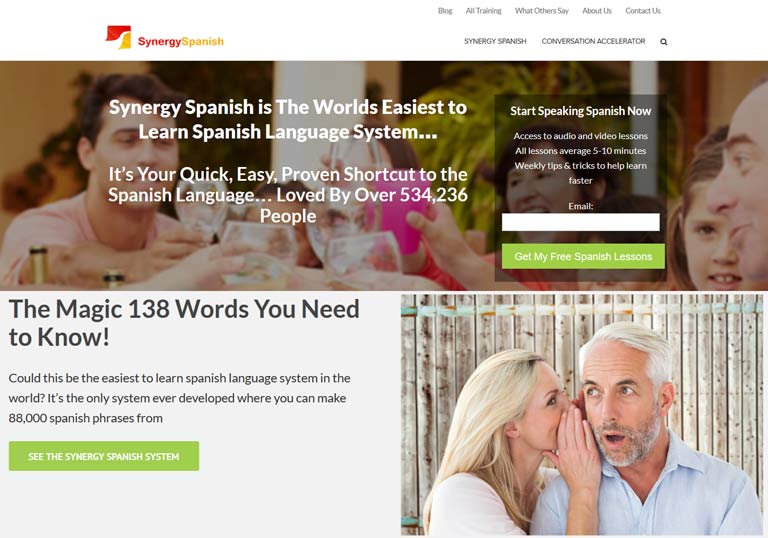 Learn to speak Spanish quickly and easily with Synergy Spanish