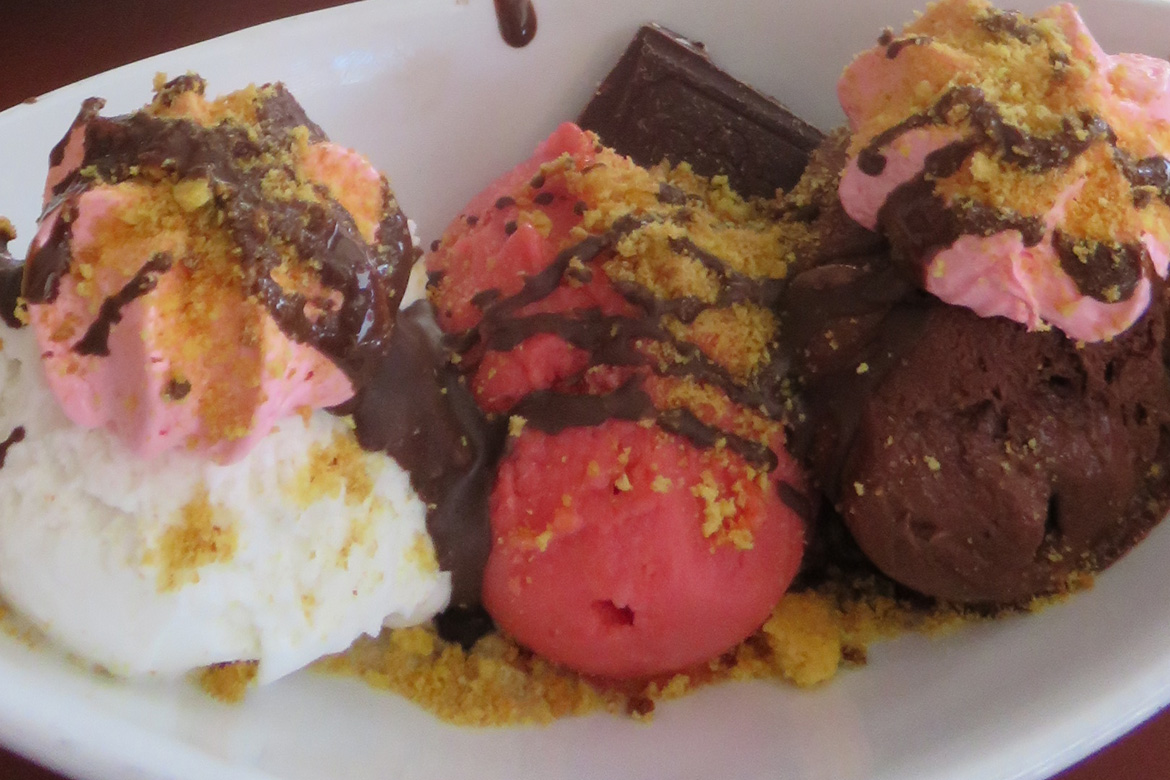 Our fascination with Cuban ice cream began a few months before our visit to Cuba.

One evening we decided to watch the iconic Cuban movie, "Fresa y Chocolate" (Strawberry & Chocolate), nominated for an Oscar back in 1993. The seductive opening scene of the film takes place over ice cream at Parque Coppelia in Vedado, Havana. A setting close to the historic university.

We were keen to replicate this scene, and to sit eating ice cream with the locals in this same well-known spot. However, it wasn't until our second visit to Havana, a month after arriving, that we'd fulfill this desire. More on that later! 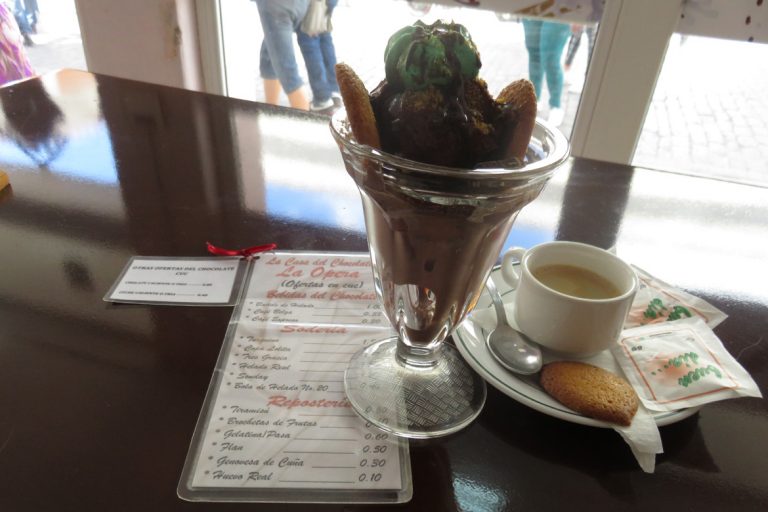 The most delicious chocolate ice cream sundae and coffee in Camaguey

The start of a beautiful relationship in Camaguey

Our love affair with Cuban ice cream began in Camaguey, one of our favourite destinations. We stumbled across a rather uninteresting shop façade, beyond which we found the most beautiful ice cream combinations.

This was all topped with melted chocolate from an overflowing fountain on the counter. This Cuban ice cream surpassed in flavour and consistency any that we'd eaten before. Better still, a three scoop sundae of rich dark chocolate, fresh fruity fresa (strawberry), and zingy coconut, with all the trimmings, cost just $1.45 CUC. And... each day we could try different "specials", each at less than a dollar.

We rarely saw a tourist, but instead sat with locals quietly enjoying their ice cream fix, or sipping a cool Cristal cerveza. The national beer is drunk like tea in some places and it is always available!

Sadly we didn't find another "Casa del Chocolate", but we did enjoy other ice cream experiences while in Cuba. 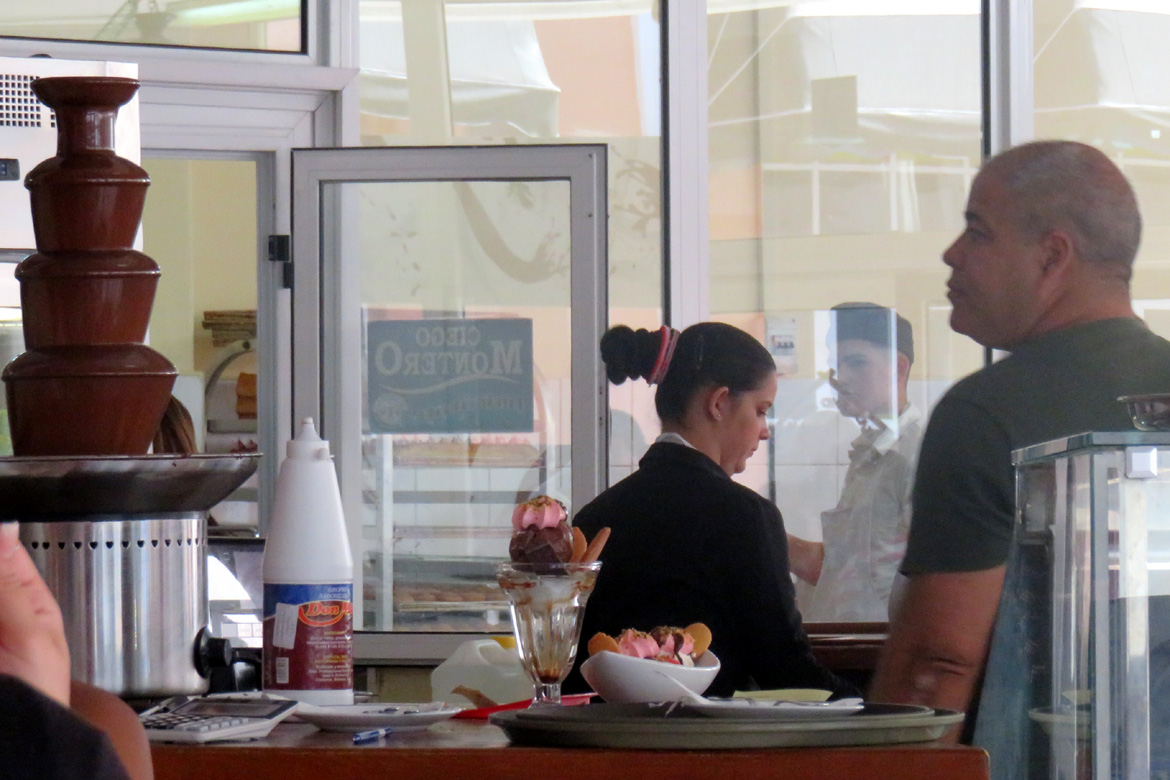 As we explored Sancti Spiritus, we spotted Cuban ice cream vendors at either end of the busy pedestrian shopping street, above which our casa was situated. They were selling small cones for just 3 local pesos (CUP).

If you're confused by CUCs and CUPs, click here for more information about the Cuban currency system.

The cones were served via a small plastic holder for hygiene reasons. Throwing caution to the wind about whether this ice cream had been made using boiled or purified water, we joined the small waiting group.

How to queue correctly in Cuba

Cubans don't always form a single line, waiting until their turn arrives. Instead they will often find a place to sit close to the waiting line, or just leave and return later, still expecting to have the same place. So when arriving you ask for “El último” - translated as "the last person waiting". As long as you keep an eye on this person, you will always know your position in the queue. Sometimes queues for internet cards, train tickets, (or Coppelia ice cream) can involve waiting an hour or more - this system makes it less painful!

We selected a flavour known as "Mantecados".

Mantecados are soft and crumbly Spanish short bread biscuits made of flour, sugar, milk, and nuts. As an ice cream flavour it is delicious. And we are glad to report no stomach problems either.

One thing I love about Cuba is the lack of consistency when it comes to food. One day we might get chocolate ice cream, the next only vanilla. The surprise element is what makes it more enticing!

One of our most frequented coffee shops in Sancti Spiritus was again on the pedestrian street. Cafe Cubita is a trendy local hangout, with a black and white decor, with surprisingly low prices. We sampled a number of inexpensive coffee combinations, which were the perfect bitter contrast to the ice cream eaten in the street outside. 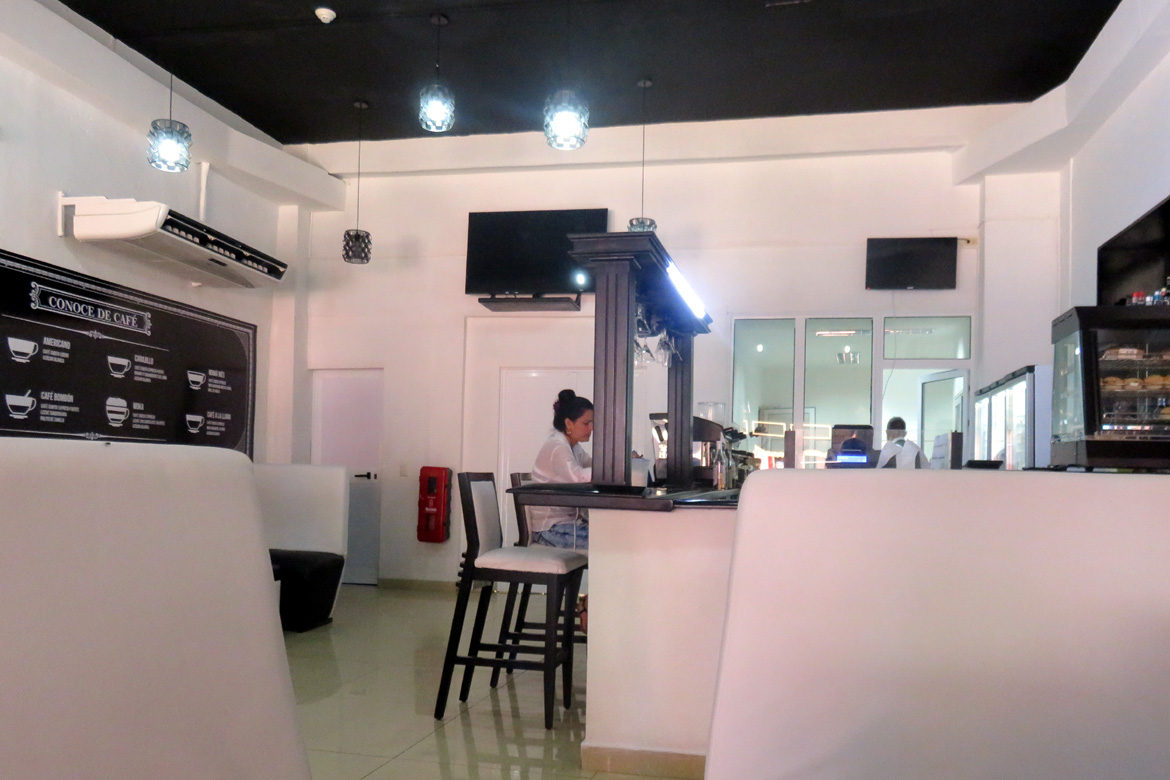 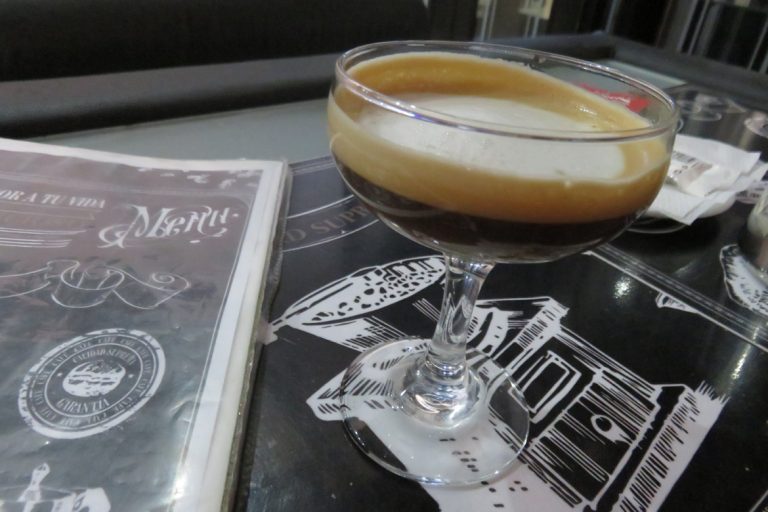 I particularly enjoyed the rich combination of freshly brewed coffee, topped with a sweet crema made from condensed milk.

In the smaller, less visited town of Remedios, I was still hungry after eating at a particularly poor restaurant. In the quiet back streets, we found a modern Cuban ice cream parlour, still open for business late in the evening. Here we learned that "tres gracias" was a popular 3 scoop dish throughout Cuba, made famous by Coppelia.

A "tres gracias" filled me up adequately and vastly improved that particular evening's meal experience!

In the absence of good food in some areas, ice cream was definitely keeping me satisfied! And, after a few days of ice cream indulgence we were starting to see that eating ice cream in Cuba is as social as coffee shops in Italy.

Our ice cream experiences got better as we progressed through Cuba. 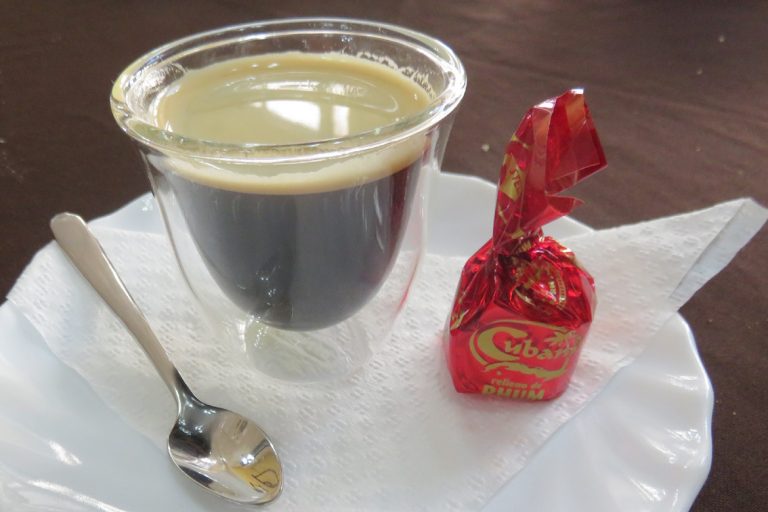 There is a huge Coppelia on Calle Colon in Santa Clara, but we opted for the sweet comforts of a smaller cafeteria serving ice cream, just off the main square. After ice cream we succumbed to minuscule Cuban coffees, accompanied by 50 cent shots of rum. This was going to be a hard habit to break!

Again, all local prices, and visited only by the occasional tourist who dared to venture away from the central plaza.

Our trip to Cuba ended with a further three days in Havana, this time in the district of Vedado. Our casa was just along from both the famous National Hotel and the Malecon. In the opposite direction, a four block walk positioned us at the iconic state-run ice-cream parlour, Coppelia, on La Rampa. I have to confess at the stage that this was by design, not by coincidence!

A huge, flying-saucer-shaped building, Havana's Coppelia employs more than 400 workers. This futuristic building with it's open-air gardens, provides seats for 1000 people.  More astonishingly it serves in excess of 16,000 litres of ice cream to 35,000 customers, each day. Yes, you read correctly, every day!

Coppelia was one of Fidel's earlier projects. He wanted to provide Cubans with more ice cream flavours than the USA, and at prices within the reach of everyone. Originally selling 26 flavours and combinations, Coppelia today offers many less options. Choices may be limited to only one or two that are available, depending on the time of day. 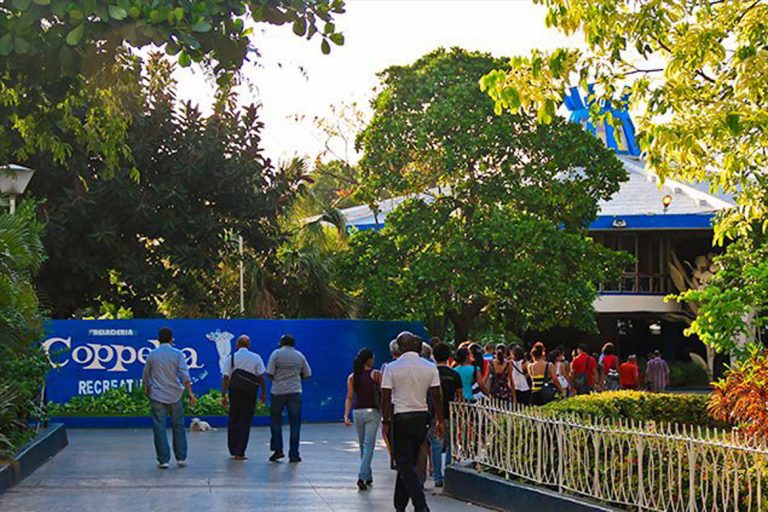 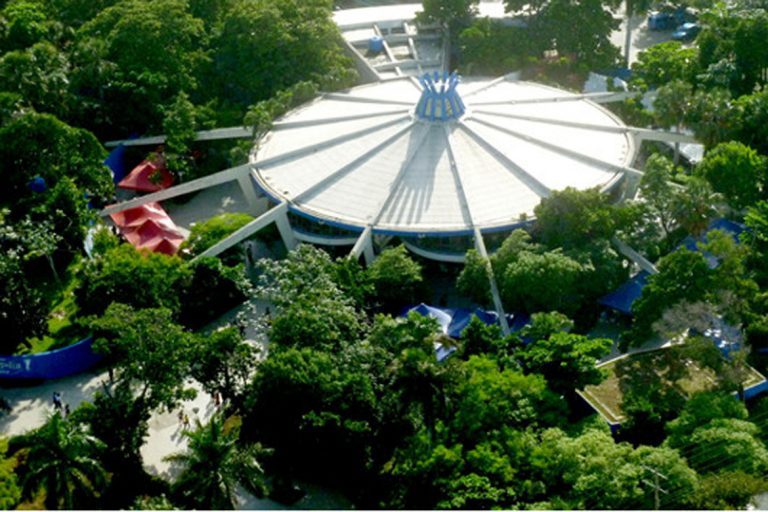 An aerial view of Coppelia in Havana

In 2017 one scoop of Cuban ice cream costs just 1 local peso. This means you can get 24 scoops for $1 CUC. In fact we witnessed many locals buying large multiple 5 scoop servings, openly transferring these dishes of ice cream into plastic containers to "take-away" for later!

One of the popular dishes is the previously encountered "tres gracias", and on this visit to Havana, it became our night-time dessert for just 3 national pesos each! Whilst served only on plastic yellow dishes, this price did include small biscuits and a crumbly topping! 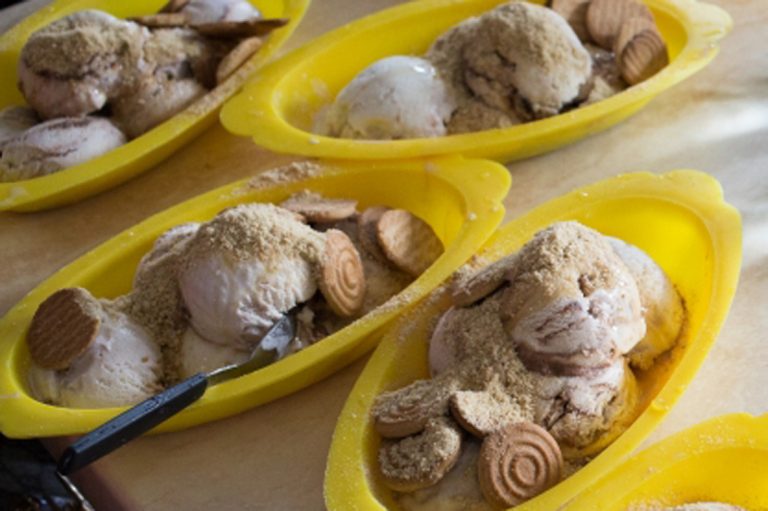 Patience in Cuba is most definitely a virtue

Our first day time visit wasn't such a pleasant experience. Coppelia in Havana is a fairly open plan affair and it's easy to walk to the outside seating areas, oblivious of the huge queues. We mistook people that had been waiting patiently for a hour or more on the periphery, as a particularly long bus queue. They were after all outside of the park on the roadside!

On wandering into the park, we were quickly directed to a less attractive tourist area where we were told we could buy our ice cream in CUC dollars - at vastly inflated prices. We took a quick look and decided we'd prefer to be in the "locals area" where Fresa y Chocolate was filmed. However, as we entered this area of the park, we were quickly accosted by security guards and rather aggressively ushered away, being told persistently "you cannot go there now".

Unable to get an explanation we abandoned our visit, a little distressed by the unfriendly treatment we'd been exposed to. On reflection, we think it may have been because we had bypassed the long queue of locals. So when you arrive, if you want to eat ice cream with the Cubans at peso prices, look carefully to see if there are one of four separate queues leading in from each corner of the park.

We found evening visits much easier, and did not have to stand in line ever after 8.00pm. We were quickly seated, but often had to wait 10-15 minutes to be served. By this time our favourite choice may have disappeared. There's no formula to the order taking and someone who arrives after you may get served first. This was a further lesson in patience, something we had to learn to accommodate quickly in Cuba.

On our first night-time visit we were invited to the table of a single Cuban guy, who was also about to order. He explained the system and sat chatting with us while we all ate ice cream together.

He explained how difficult it is to survive on the state salary of $35 per month, and told us some of the creative ways that Cubans make more money. We had to wonder if his two plates of "tres gracias" were his very cheap dinner. But the Cubans are proud and although we offered to pay for his, along with ours, he graciously refused.

Don't be a tourist - brave the queues

Paying $1 CUC per scoop along with the other tourists to get instant gratification and more flavours, is to miss the point.

This is an institution, a place where Cubans of all ages, colours, and status gather together to chat and enjoy the simple pleasure of eating ice cream. There's no WIFI and so conversation and laughter fill the air.

Standing in line, getting to know the people next to you, and remaining hopeful that chocolate will still be available, is all part of the fun. Enjoy your Cuban ice cream experience!

Where will I find Coppelia in Cuba?

You won't find Coppelia in every city. Our ice cream buddy told us there was, however, one at least in each province. He also told us that outside Havana you get a more rounded scoop - better value for money!

We attempted to visit Coppelia by the bus station in Matanzas. Sadly it had more flies than people, so we gave it a miss. During busy times, at state-run establishments, the staff are not quite so hard working as you might expect. Tables had been left uncleaned, inviting unwanted visitors!

On the other hand, if you were earning only $35 a month, how dedicated to your work would you be?

Vanessa & Ian are full-time British travelers and house sitters who have published the online publication House Sitting Magazine since 2016. They provide numerous resources for the community as they continue their explorations and slow travel adventures across the globe. You can find out more about their house sitting lifestyle at LongTermHouseSitters.com