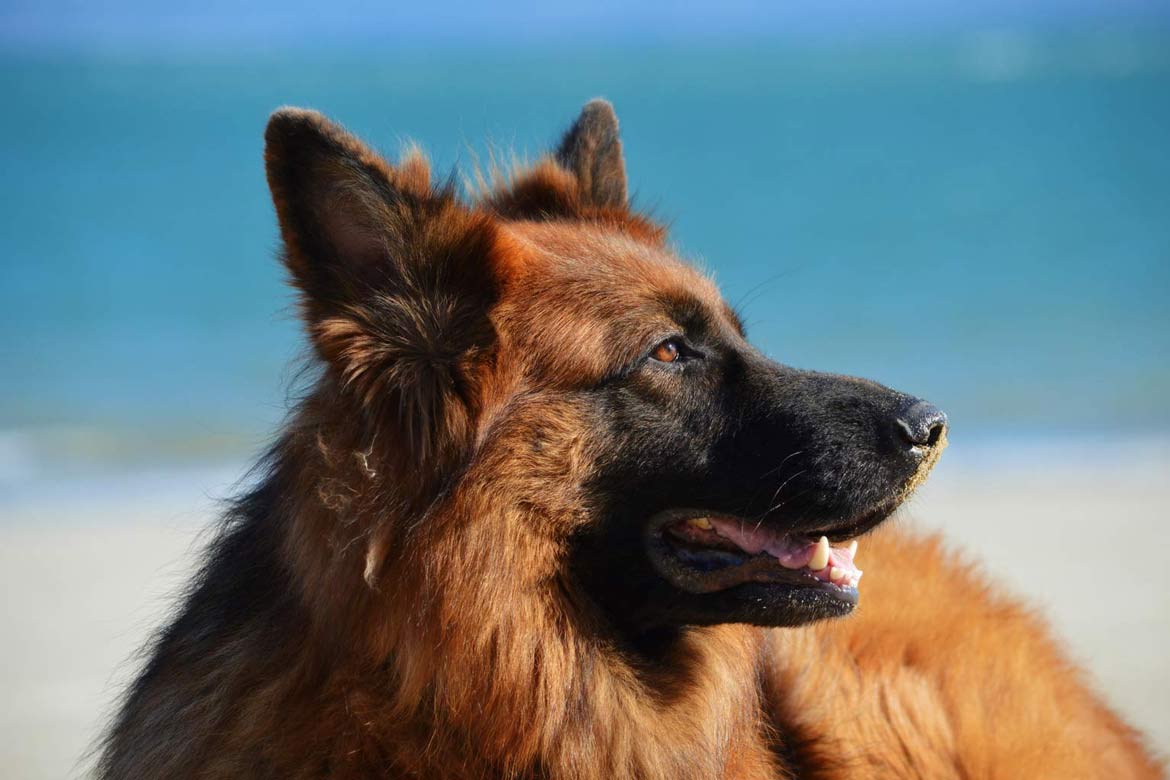 The German Shepherd (German: Deutscher Schäferhund) is a breed of medium to large-sized working dog that originated in Germany around 1899. It is also known as the "Alsatian" in the UK and abbreviated to "GSD".

German Shepherd's are part of the herding group or "pastoral breed" of dogs and were originally developed for herding sheep. Usually this type of dog has a weatherproof double coat to protect it from the elements when working in severe conditions. Breeds such as the Collie family, Old English Sheepdogs and Samoyeds, who have been herding reindeer for centuries, are others included in this group.

Because of their strength, intelligence, ease of training and obedience, GSDs are now often the preferred breed for many types of work, including search-and-rescue, disability assistance, police and military roles. In World War One 48,000 were enlisted in the German army. 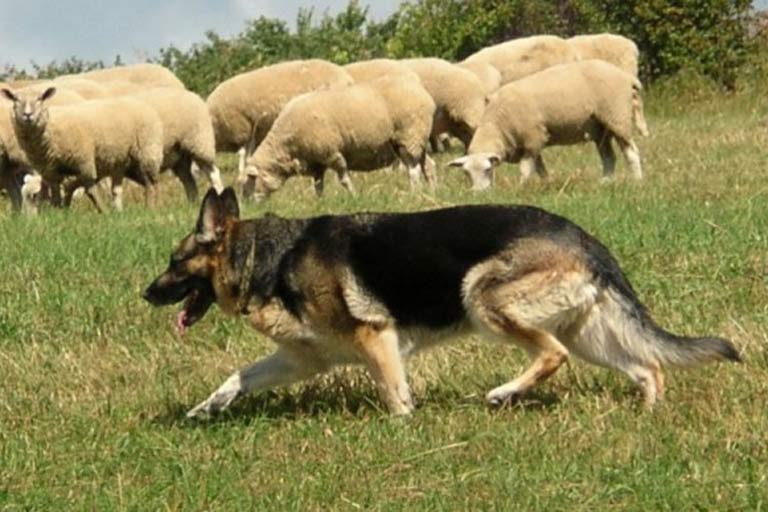 Size and temperament of the German Shepherd

German Shepherds are large dogs with females averaging 25-32kg and males 30-40kg. Height can be between 55cm and 65cm - the female is a little smaller than the male.

They are moderately active dogs and described in breed standards, as self-assured. The breed is marked by a willingness to learn and an eagerness to have a purpose. They are naturally curious, which is part of what makes them excellent guard dogs and suitable for search and rescue missions.

Sometimes a German Shepherd can become over-protective of their family and territory, especially if not socialized correctly.

They are not inclined to become immediate friends with strangers. For this reason when house sitting German Shepherds, try to allow some time to get to know the dog with the owners if this is possible and time permits. Scheduling a longer handover, arriving the day before, could be a good way to do this.

In the book 'The Intelligence of Dogs', author Stanley Coren ranked the breed third for intelligence, behind Border Collies and Poodles. He found that they had the ability to learn simple tasks after only five repetitions and obeyed the first command given 95% of the time.

When house sitting, take time to find out what commands and tricks have been learned. This will keep your Shepherd stimulated while the owners are away.

German Shepherds are fiercely loyal and strong dogs. It's important that they are well trained and socialized as puppies to ensure that they do not become over dominant. Read more about dealing with strong characters here in this article: How To Train a Dominant Dog

Are GSD's aggressive and do they bite?

Well-trained and socialized German Shepherds have a reputation for being very safe. However, the bite of this dog is a little stronger in force than a Pitbull, and so it is important to quickly demonstrate alpha control if entering temporarily into a Shepherd's life.

In truth, determination may well need to be an important facet in an owner’s make-up, as a Shepherd needs a firm, consistent hand. They are highly intelligent dogs and needs to be kept occupied if they are not to become bored and, in turn, mischievous. 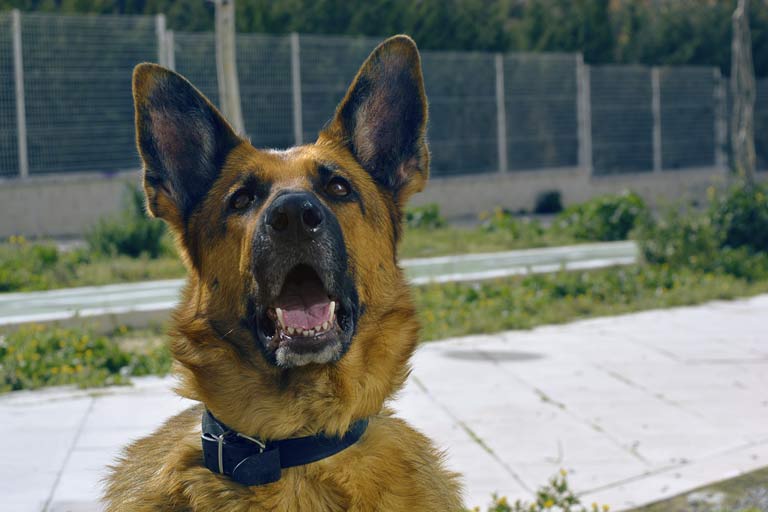 You may come across both short and long coated Shepherds and they both molt throughout the year, so regularly grooming is necessary. Long coats will require more brushing to avoid matting.

They love water and will happily swim in the sea or in rivers, but you can also wash them and hose them down without too much difficulty.

How much exercise does a German Shepherd need?

German Shepherds need more exercise than just about any other breed and you will struggle to tire them out.

As a house sitter you should prepare yourself for long energetic walks, runs or cycle rides.
Of course, age and health should also always be considered when assessing the length of the walk, so always discuss this with the pet owner. A quick pad around the local park isn't nearly enough, and a bored Shepherd can become frustrated, leading to bad behaviour.

German Shepherds are susceptible to hot weather. If you have a long-haired shepherd and you are house sitting in a hot or tropical area, provide your temporary charge with plenty of water and shade while outside. Walk in the cool early hours of the day or evening where possible.

Don't demand too much of him on extremely hot days. 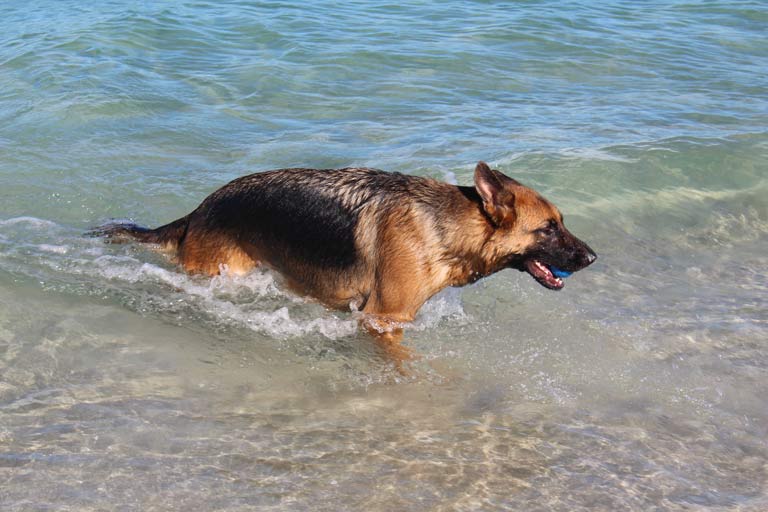 It's usually straight forward to feed a German Shepherd, but meals should be divided into two each day. They are a deep chested breed and one huge meal can cause torsion (twisting of the gut).

They particularly like fresh meat and a mix of good quality biscuits. Avoid highly coloured foods, wheat and flaky foods.

German Shepherds shouldn't be fed human junk food or tidbits as they have sensitive stomachs.

Many owners prefer a natural diet for this reason.

At our house sit in Australia, we were instructed to feed 'chicken necks' as the preferred meat choice. We also gave Xena a couple of spoonfuls of natural yoghurt before bedtime to help settle her stomach.

Looking after a GSD while house sitting, or as your own pet, can be extremely rewarding. But you must be confident with large dogs and generally able to exercise them energetically on a twice daily basis.

We spent two days with our house sit home owners before they left. They wanted to be sure that we could handle Xena and that she would return to us on command. This was very beneficial as she learned quickly to trust us while the owners were still around. This is good advice for anyone house sitting for a willful or alpha dog. Again, make sure you arrange an adequate handover, preferably arriving the day before.

This extra time enabled us to observe our home owners' behaviour around Xena, resulting in a smooth, easy handover.

Information in this article has been drawn from personal experiences as well as the following websites: 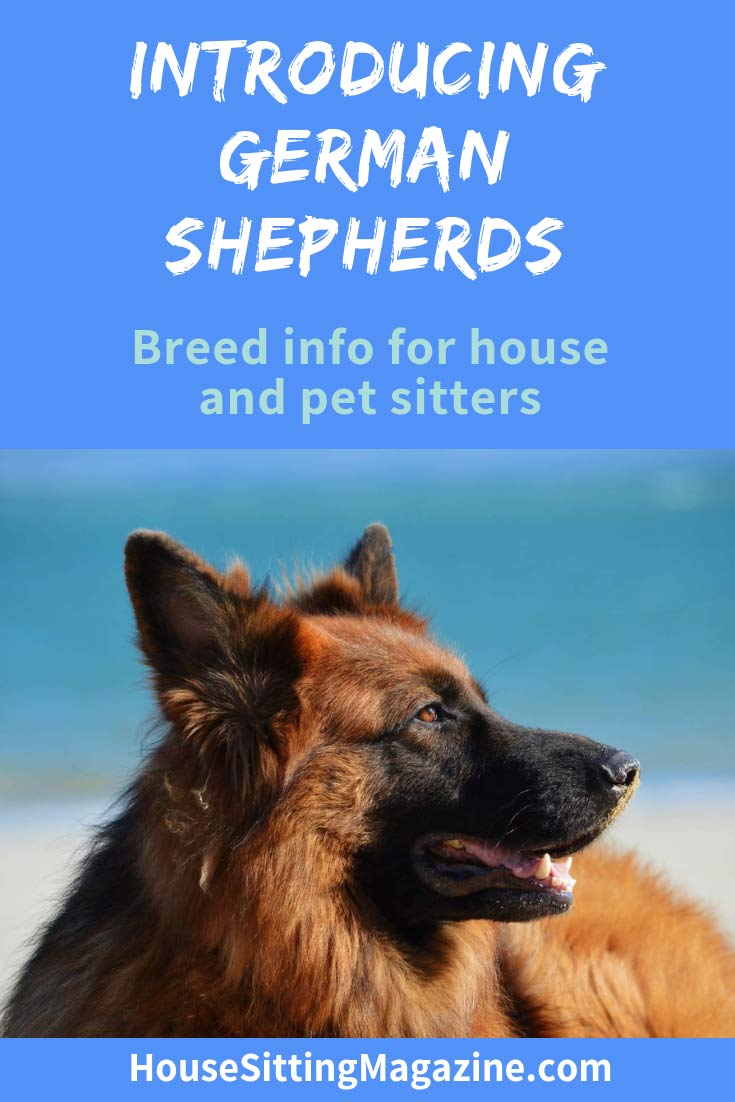