Lost in the Mexican Mountains 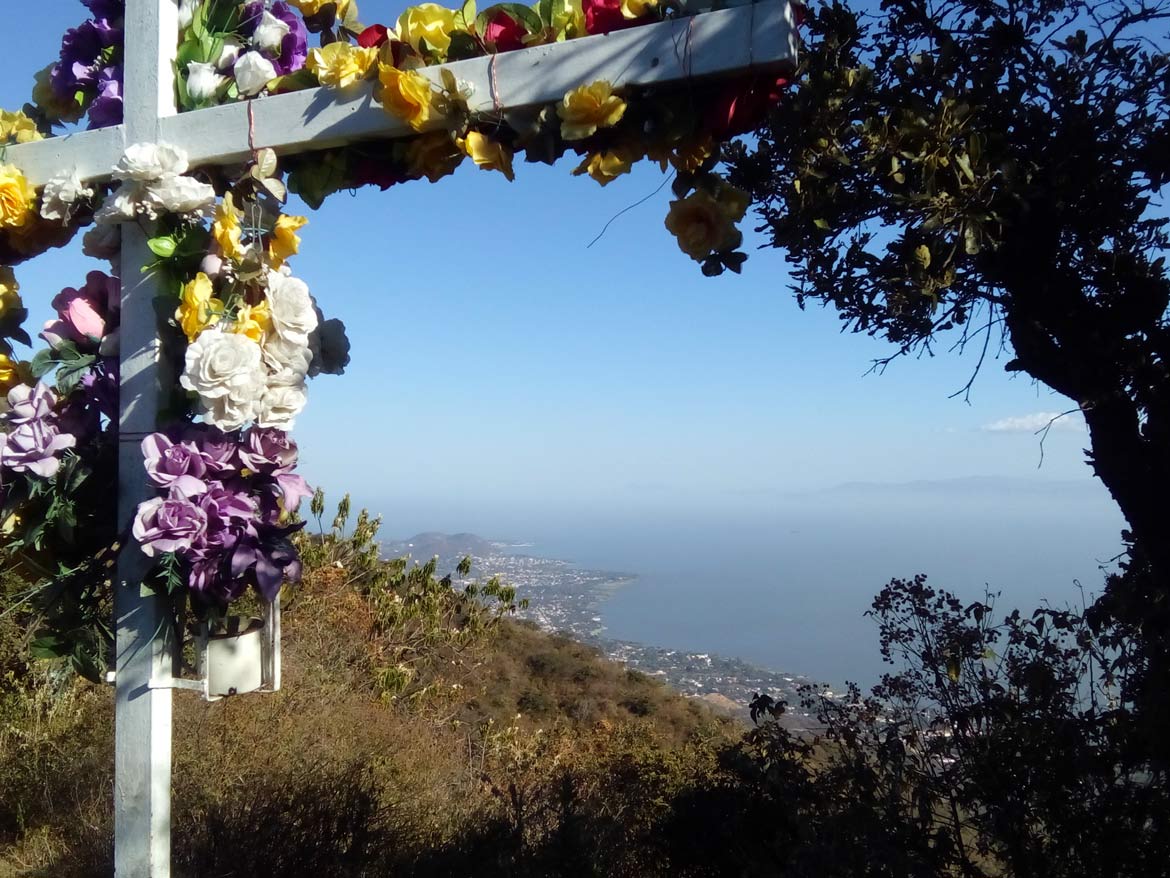 Are you driven to achieve, but does your desire to reach the top ever get you into trouble?

Do you often ask yourself, “How the heck did I get myself into this situation?”

I found myself asking this very question, often with an expletive suitably inserted, over and over again a couple of days ago.

We’re currently house sitting in a little village in Mexico called San Juan de Cosala, close to Ajijic on the north shore of Lake Chapala. The towns on the northern side of the lake are squeezed in between the water’s edge (about 1500 metres (4,900 feet) above sea level) and the impressive mountain range just to the north. Our current assignment is on the edge of the village, at the foot of the mountains. 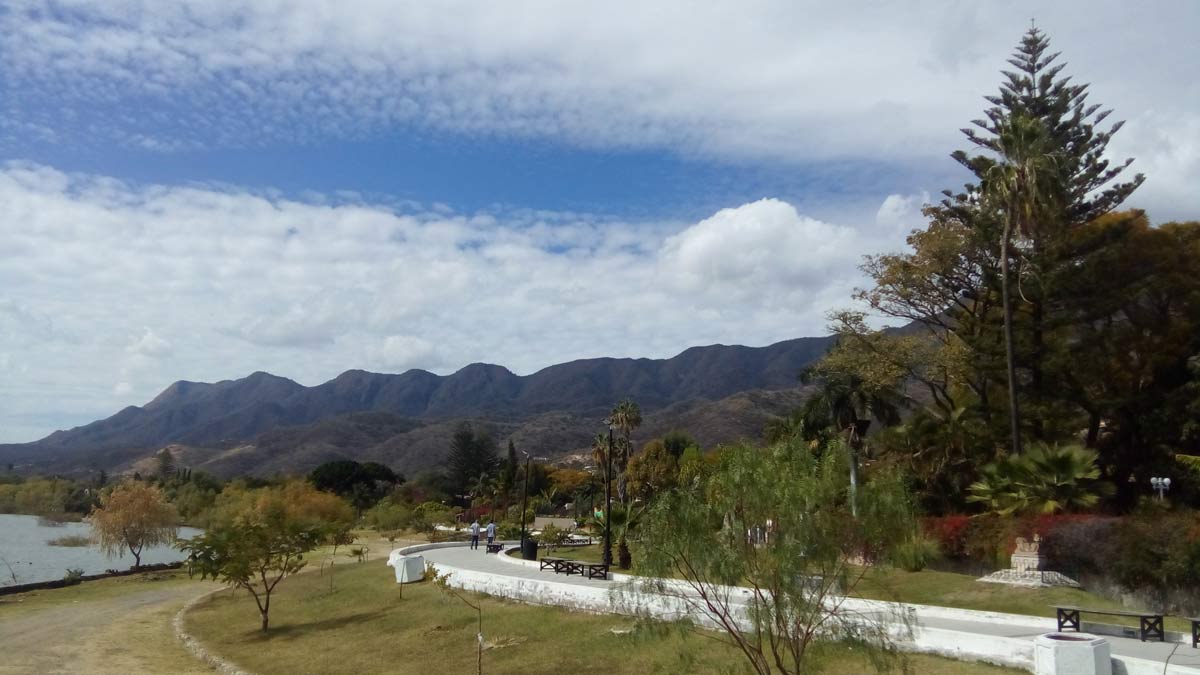 It goes without saying that the summits beckoned. Google Maps informed us that our local summit peak was about 2350 metres (7,700 feet) high, a climb of 850 metres (2,700 feet) from the lake.

Above our house we can see several white crosses high on the hillside, and before our home owners told departed, they told us that the trailhead for the path leading to one of the crosses was directly behind their house. 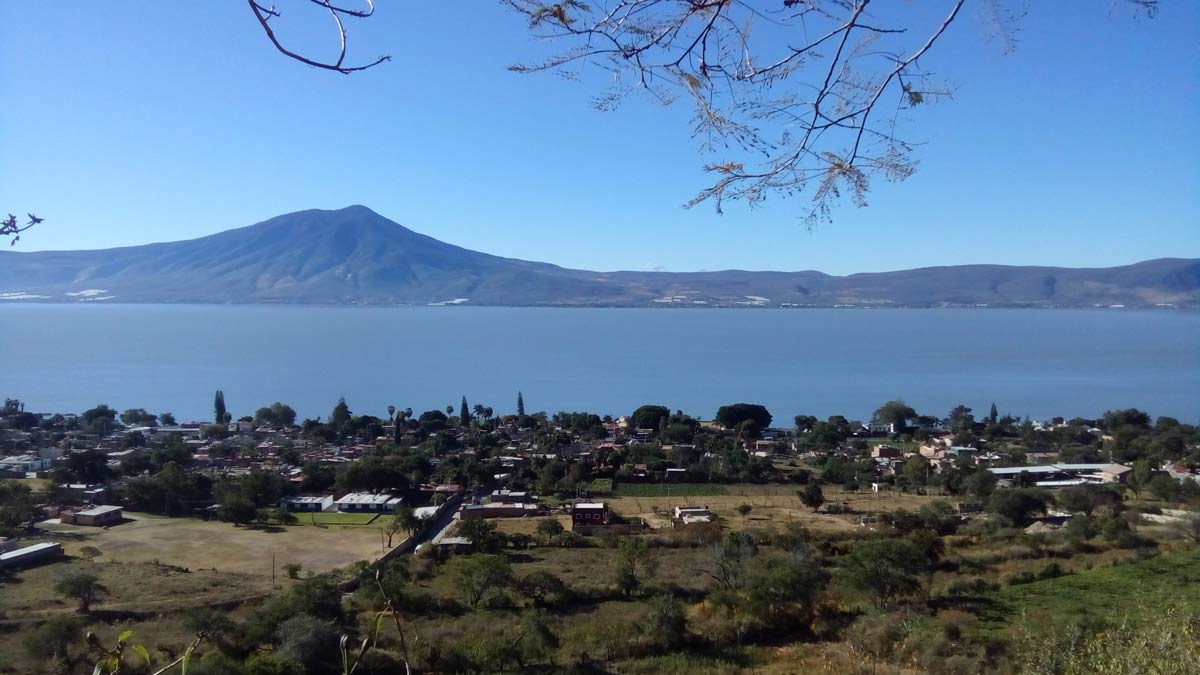 Could we get to the top from there, I had wondered. Our home owners didn’t think so, but did mention another track that certainly reached the ridgeline. We could find the trailhead a short drive along the main road, behind the tennis club.

Keen to explore our own back yard Vanessa and I had breakfast after I finished my day’s work. I currently work a couple of hours each morning from 7am as an English teacher. I teach students in China, so early morning here, is late evening in China. With work over for the day at 9am, we filled a water bottle and began our climb.

The route wasn’t marked, and with many animals living on the hillside it was difficult to figure out what was a path, and what was simply a route flattened by animals. 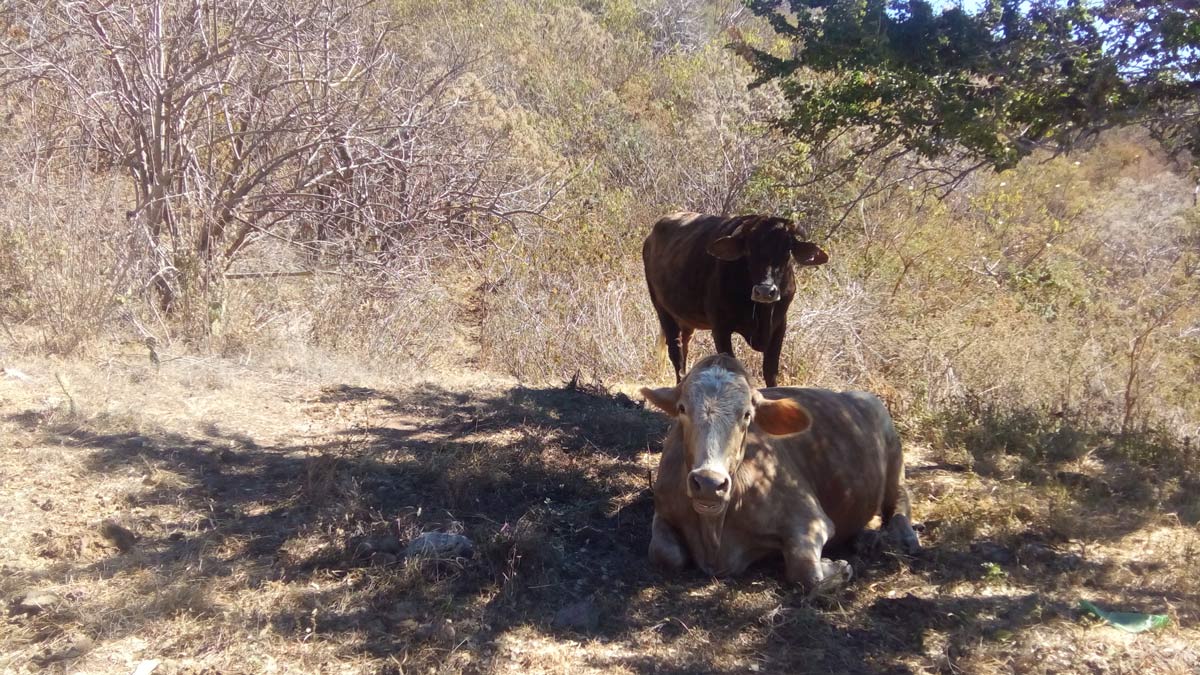 After a couple of detours we finally found the cross almost directly above our house.

We savoured the view briefly before continuing our upward climb on what looked like the best path. As the path steepened and became dusty and slippery, Vanessa decided she had had enough for the morning, and we discussed our options. We had responsibilities to the pets in our care, so we couldn’t both be out for too long.

Vanessa headed back down, leaving me with our remaining water, and I continued upwards.

“What time do I call the emergency services if you don’t come back?” she joked.

My path climbed steeply up the side of a deep valley, and I grew more confident that I would soon reach the ridgeline at the top. My confidence was misplaced, as I soon discovered when the path seemed to just disappear. 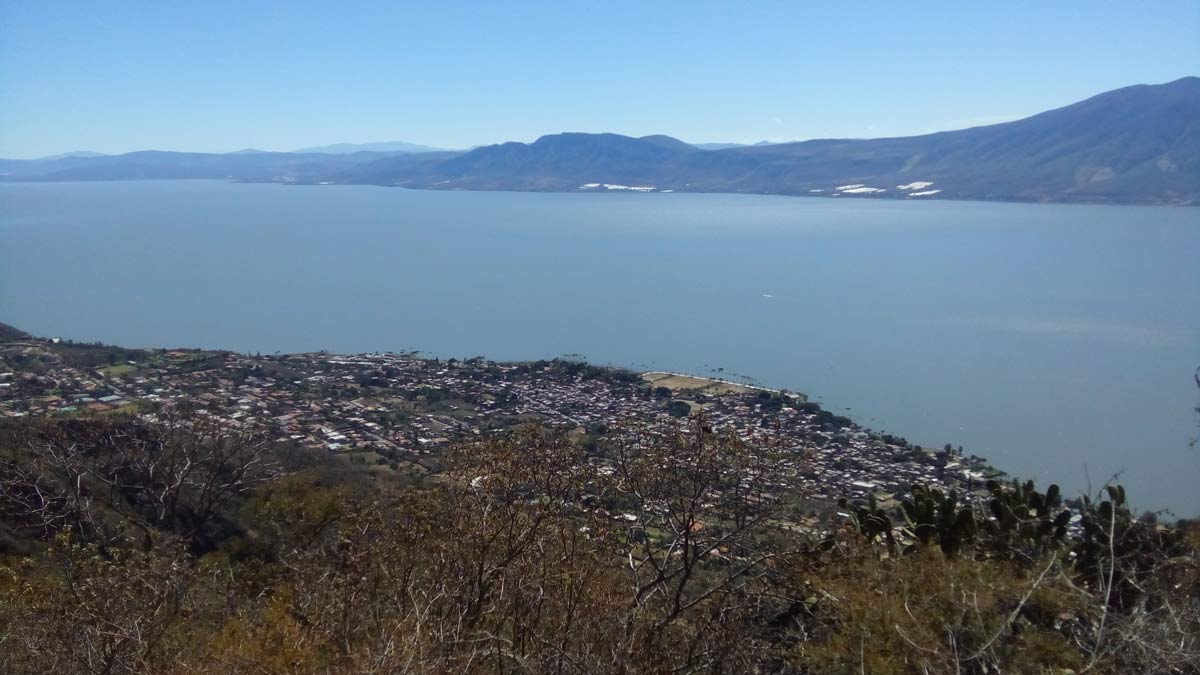 The GPS on my phone suggested I wasn’t far from the top, so I struggled through some bushes, looking to regain the path, only to encounter more bush. Trying to pick the path of least resistance I slowly fought my way upwards on the steepening hillside.

Occasionally I would find something that looked like a thin track, and I would progress a little more easily for a short distance, but the track would disappear again, and I had to return to battling the bushes.

Time to turn back? No way! And my GPS was still offering hopeful news.

At times I had to crawl to get under bushes, and occasionally I would find myself completely imprisoned, unable to progress in any direction until I pulled, snapped and tore a hole I could pass through.

I started to encounter steep rocky sections, and had to either climb them, fighting my way through the bushes growing over them, or I had to backtrack and find a way around. It had now been over an hour since I had last seen the path, and my GPS showed that I had hardly moved. I was also out of water, and it was now well past midday.

I started to realise that the option to retrace my steps was no longer viable, as climbing down through the undergrowth would be harder than going up through it. There would also be the added danger that I might tumble down one of the steep rocky drops I had passed on my ascent. 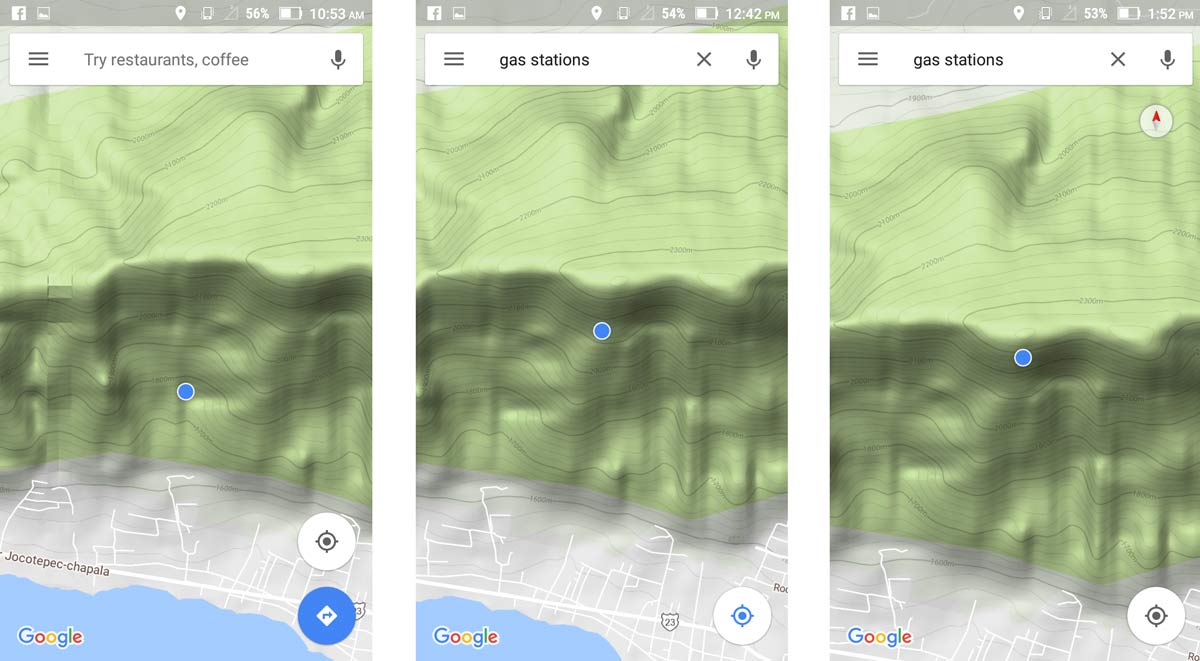 Reaching the top appeared to be my only option. I really hoped that the undergrowth would be clearer up there, and that there actually was a track along the ridgeline.

Another exhausting hour later I finally broke through to an open area, and realised I had made it!

The top was flat and open, and I heaved a huge sigh of relief to find a fairly well worn track heading both east and west.

“Should be down soon,” I thought, with a sigh of relief. I was amazed to find that I had a weak mobile phone signal, so sent Vanessa a short “Made it!” message. She was safely back at home, snuggled up on the sofa with the pets.

I headed east, hoping to find an obvious path leading down towards the tennis club. There were a couple of thin, overgrown possibilities, but they looked more like animal tracks that pathways, and I rejected them. I passed one more promising possibility descending from a small peak on the ridge, but passed it by, still not convinced this was the descent.

Much further along the ridge I got a great view down to the lake far below, and could see I was a long way past the tennis club already. I decided that the path behind me from the small peak must be the descent I had missed. 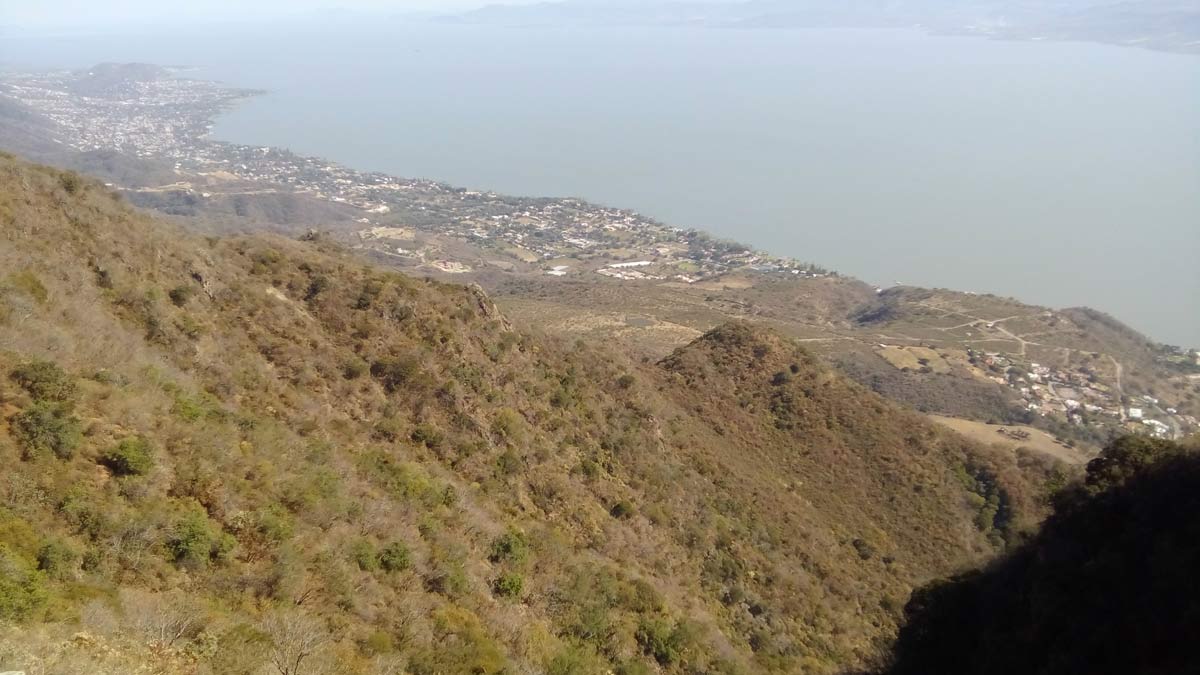 I back-tracked and began to head down the dusty, slippery path. For 15 minutes or so all went well, but I was slightly worried, as the path was indistinct, and route-finding was difficult. As on the ascent, I lost the path completely, then re-discovered something that might or might not be the route. As I descended further the going became trickier, and I started to really worry about slipping or falling. I had obviously got it wrong, and the only option was to return to the ridge again.

The battle back up was as bad as my initial ascent, and when I finally regained the summit I was shattered. It was now past 4pm.

The possibility of having to spend the night on the ridge seemed like a real possibility, as darkness was only a couple of hours away, and I didn’t want to become benighted on a steep, loose slope covered in dense bush.

I had seen an abandoned pair of tracksuit trousers hanging in a tree, a comforting sign that other people did pass this way occasionally. As I passed them again I collected them, hoping they would give me some protection during a long cold night on the summit ridge. I was only wearing shorts and a t-shirt and at this altitude temperatures drop sharply.

I continued east along the ridge, past the point where I had given up and back-tracked the first time. I was a long way past my goal far below, but just hoped to find any decent path leading down. I felt a little foolish as I did not have a suitable map, nor had I bothered gathering much local information. I’m pretty experienced in the mountains after a lifetime of climbing and hiking, but I had made some very basic errors, over-confident about finding my way up and down again, on what had looked like a pretty easy route. 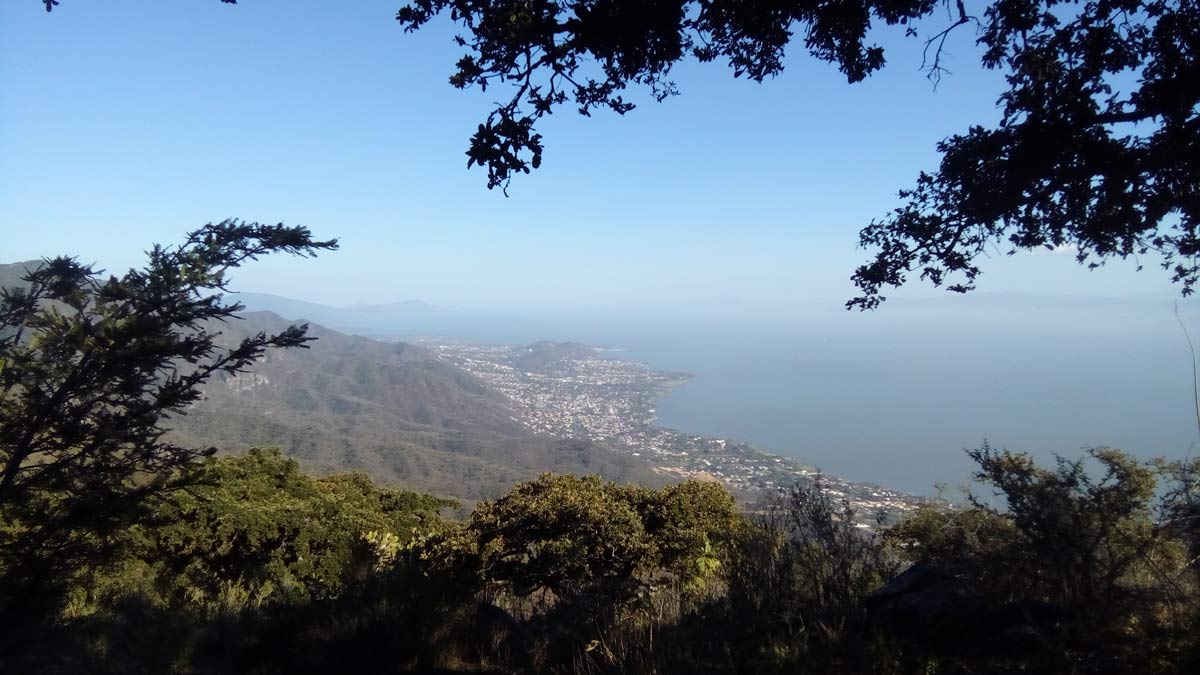 I wasn’t too worried, as the worst case scenario involved a cold night, an uncomfortable level of thirst, and a long hike the next morning. In my mind I was wondering how I would word the message I would have to send to Vanessa. “Don’t worry, but…”

Google Maps provided enough information to show one possibility much further along the ridge, so I continued in that direction. I would never make it before dark, but perhaps I could find the top of the trail down, confident of an easy descent for the morning.

But about half a kilometre further on, as the path descended to a col between two peaks, I was very relieved to find a beautifully decorated cross, and a very clear path heading south, down from the ridge. This could be it.

I still had time to get down before dark, and as the path descended I became increasingly confident. I was parched with thirst by now, and laughed at myself as I imagined how a cold drink would feel.  I kept thinking of the old joke about the man banging his head on a brick wall. “Why are you doing that?” a passer-by asked. “Because it feels so good when I stop!”

A cold drink would be just about the best thing in the world right now. And then something to eat. I had had nothing since breakfast more than eight hours earlier.

The path twisted and turned, and to my surprise eventually opened out at the tennis club. It was the path I had been looking for all along. I stumbled into the first shop I came across, and studied the possibilities on offer in the fridge. I paused to experience the final moments of discomfort before taking a big gulp of icy cold grapefruit juice. 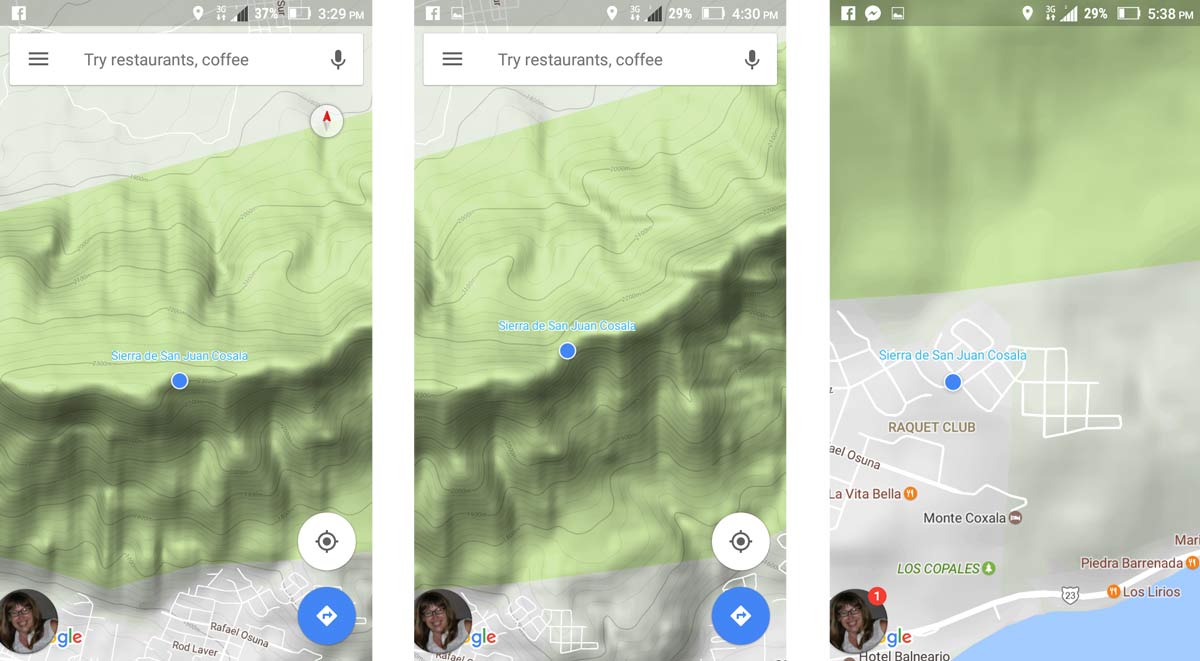 A short bus ride later I made it back home just as night descended. It was easy to laugh now at what was a pretty poorly planned trip into the mountains.

Hopefully I will learn my lesson, but knowing myself, I don’t think this will be the last time I find myself asking, “How the heck did I get myself into this situation?” Far from it.

As I write this couple of days later my legs are still aching. My body is reminding me that I am no longer in my twenties.

Yet my mind still isn’t ready to accept the realities of being in my fifties. This morning I found myself looking up at the mountain again, thinking, “Maybe to the right of that gully there might be a better path up!”

Yes, I’m sure that it won’t be long before I’m asking myself once again, “How the heck did I get myself into this situation?”