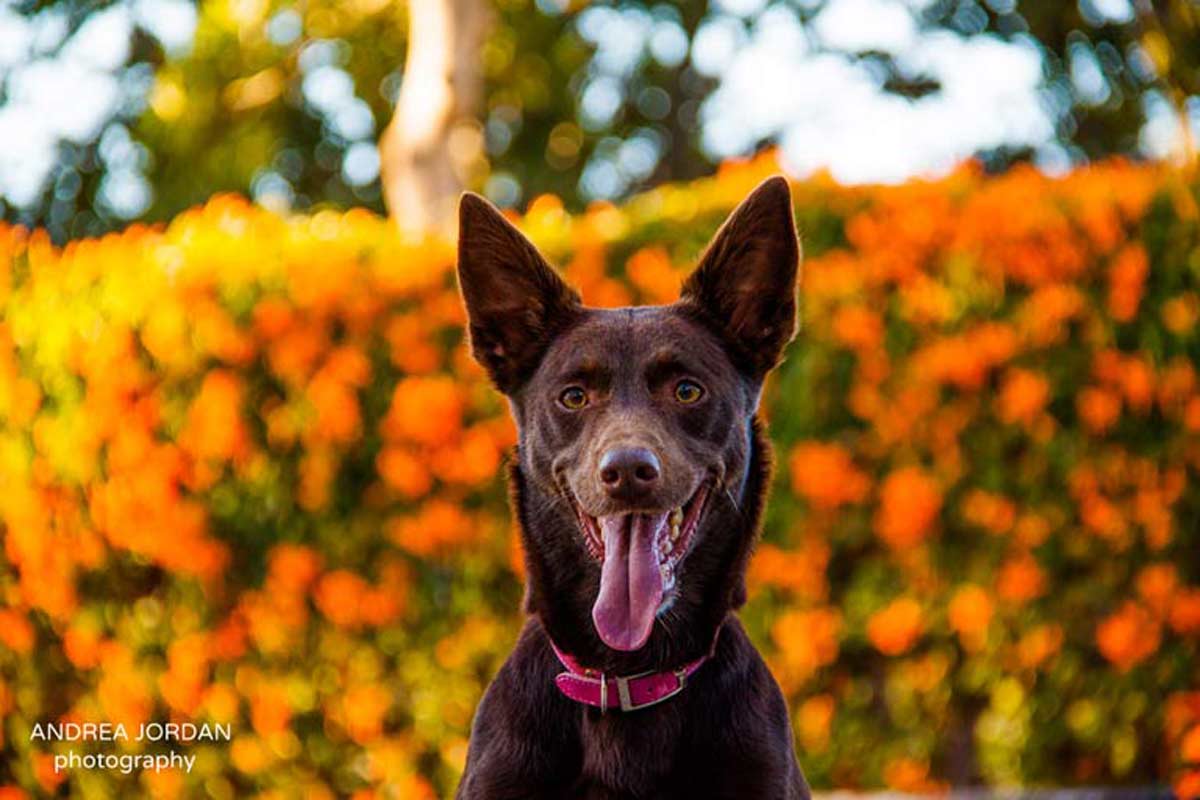 
If you are a house sitter, you’ll know that social media is flooded with cute images of dogs, cats and other pets. As house sitters we might even have our own social pages where we share pictures of our pets with our home owners – something that’s appreciated by many, as part of the service we provide. However, you should always make sure that you first have the approval of the home owner to publicly share these pictures.

We often avoid posting accurate location information, and sometimes names, so that it’s not possible to discover where you or the pets are. But for many this isn’t a concern.

You’ll also need some great pictures of pets, or you with pets, for your house sitting profile – make sure you take full advantage of posting as many pictures as you are able on the house sitting website of your choice.

However, taking great pet photos is another matter entirely! We sometimes take over 20 pictures just to capture one good image.

So, to help perfect the process of taking perfect pet photos, we asked photographer and international house sitter, Andrea Jordan, to give her professional advice on how to take stunning images of house sit pets.

Here are her top 10 tips on pet photography for house sitters:

1. Turn on your brain first 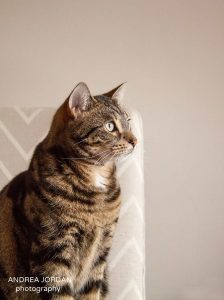 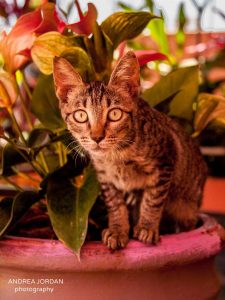 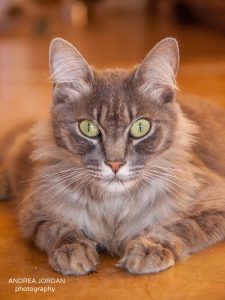 The best advice I ever received was to turn on my brain before turning on my camera!

Stop and think about why you’re taking the photo.

2. Get to know your pet subjects

Taking the time to get to know your subject first will pay off.

This is especially true if you are taking photos of other people’s pets.

Not every animal will like having a camera thrust at them, and some find the lens of a bigger camera downright intimidating – it can look like a big eye staring at them. So get to know them first and then slowly introduce your camera. 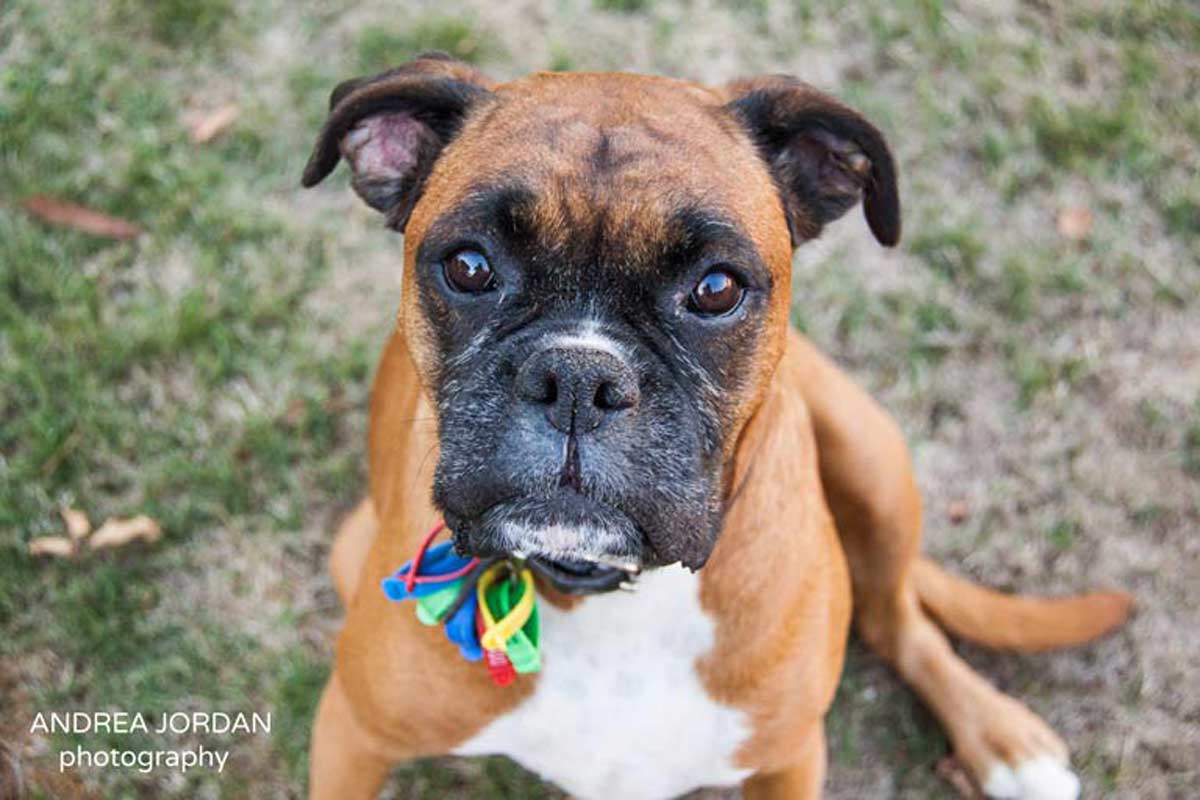 3. Pick up your camera as a regular activity

Take photos near the animals but not of them. Get them used to you picking up the camera without having it pointed at them.

Above all else, be patient.

4. Pick your time to take photos


You’re not going to have much success taking photos of a cat if it’s their feeding time. The same applies if you mention to a dog that you’re going out for a walk, but then pick up your camera instead.

Whatever time of the day, if they’re not interested then don’t push it as you don’t want them to associate the camera with something they don’t like.

5. Get to know your exposure triangle

The exposure of a photograph determines how light or dark an image will appear when it’s being captured by your camera.

Exposure is made up of 3 camera settings:

Do you know how ISO, aperture and shutter speed work together?

If you want to take better photos then you’ll want to learn this as their combination is the key to a perfectly exposed photo.

6. How to blur the background and keep the pet sharp

Aperture is the key here. It’s the size of the opening that the light is coming through.

The size of the aperture decides your depth of field i.e. how blurred your background looks.

In the feature image on this post I’ve used a shallow depth of field (large aperture) so that the orange flowers were blurred.

7. How to capture a photo of action?

Shutter speed is your new best friend. The shutter speed refers to how long you allow the light to flood in.

Imagine standing at your front door and quickly opening and shutting it. That is the equivalent of a fast shutter speed (great for freezing movement).

If you open the door and then slowly close it you have the equivalent of a slow shutter speed (great for when you want some blur in your image).

This photo of Casey and Stella playing in the river used a shutter speed of 1/2000 and an aperture of f5. 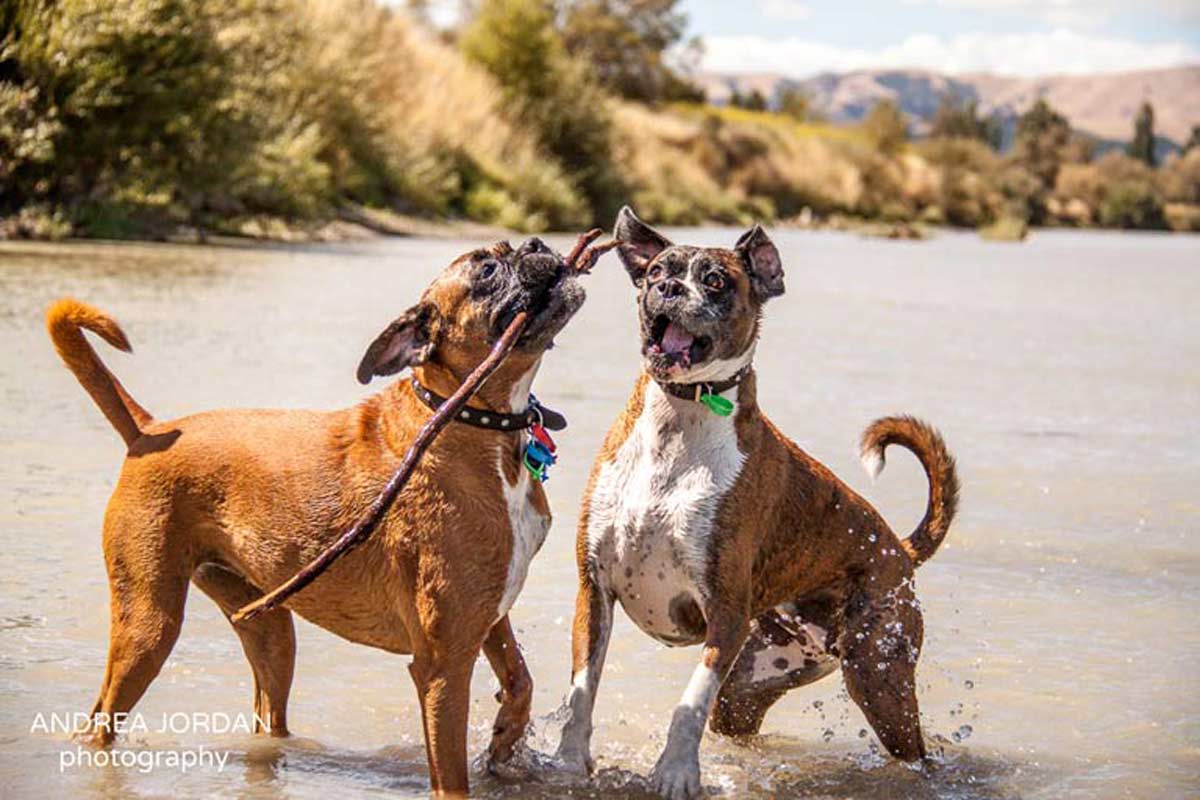 The best light to use is soft, even light which doesn’t give harsh shadows.

You can find the best light in the early morning or the late evening when the sun is low in the sky.

Of course, you’re not always going to be able to take photos at that time of the day. In that case you can also use areas of open shade to avoid harsh light e.g. under trees or under a covered veranda.

Inside can be another good option if you have a large window that light comes through.

Catchlights are the tiny reflections of light in eyes. These make the eyes really come alive. Making sure that you have catchlights is important especially for pets with black or dark grey faces to make their eyes really stand out.

If catchlights aren’t appearing in your photos then you need to seek out more light.

The sun was getting high when I took this image so I had the dog stand underneath a stone archway to give him some shade, 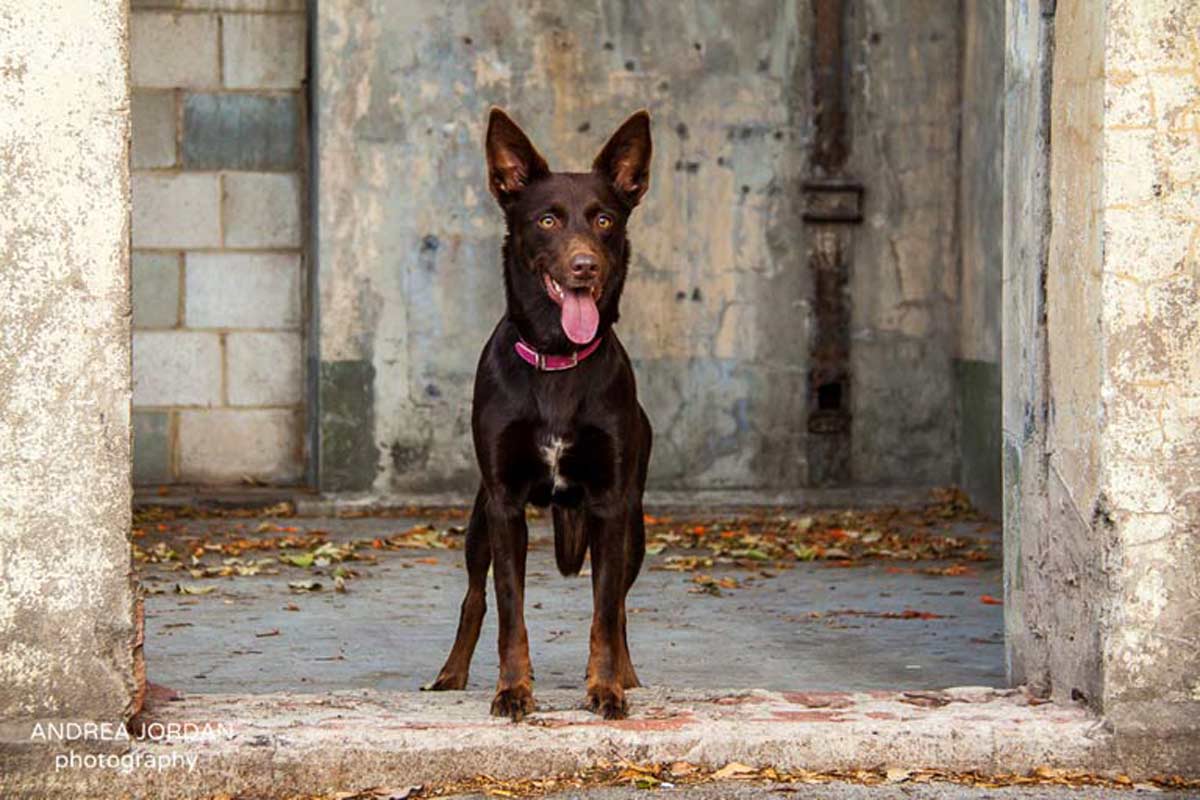 When you are shooting still portraits it’s best to use a single focus point so that you know exactly what you are focusing on.

If you don’t choose the focus point then your camera will automatically focus on the object that is closest to it. This is usually the pet’s nose! While noses can be gorgeous, most of the time it is the eyes that we want in focus. 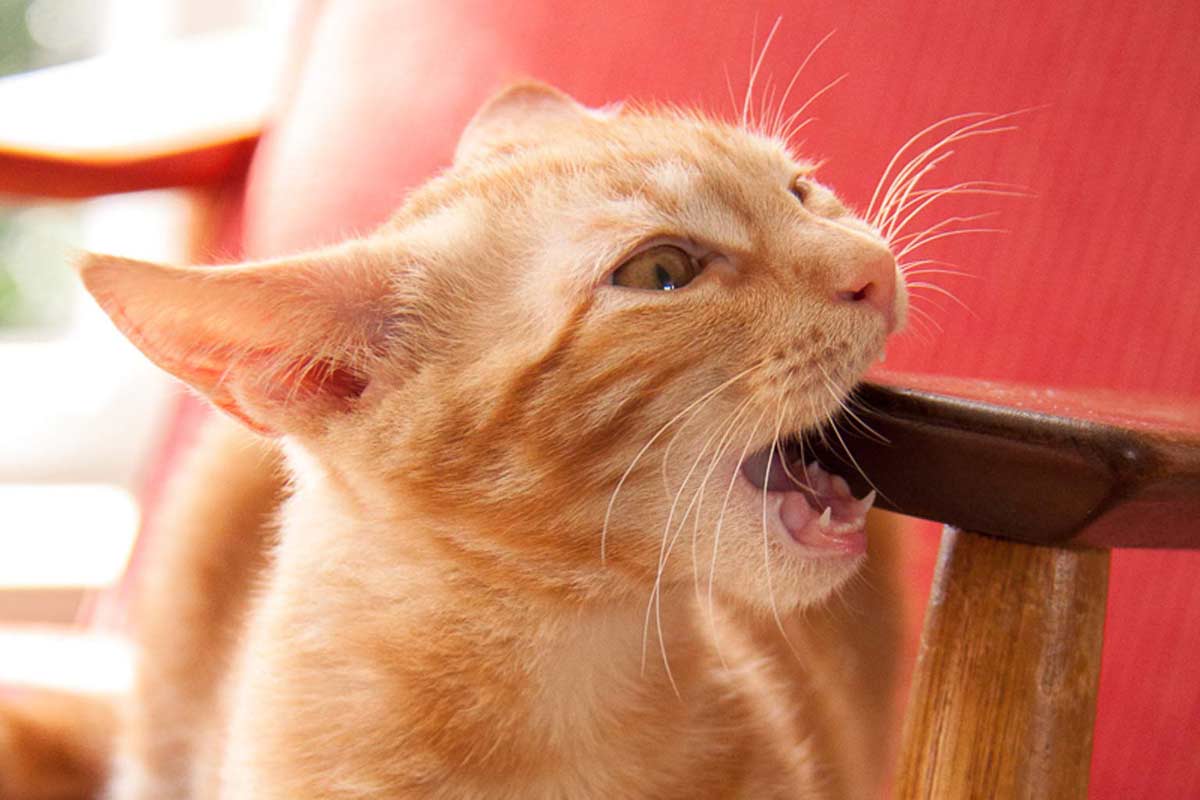 Do you always take photos from your eye level? Mix it up.

When photographing animals I’m usually down on one knee or lying on my stomach to get the photo that I want.

When taking photos of animals get down to their level as you get their view of the world.

BIO – Andrea Jordan has traveled to over 50 countries and all 7 continents. She put her business in her backpack and is now traveling throughout Latin America, house sitting and volunteering in animal shelters as she goes. She’s a keen dog walker & champion bell-scratcher, but it’s when she picks up her camera that magic happens. She creates stunning images that capture the personalities of the wonderful creatures she cares for. You can see her photos and read about her travel adventures and her business life here:  htttps://www.learndiscoverbefree.com 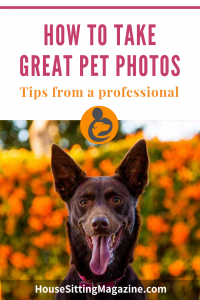