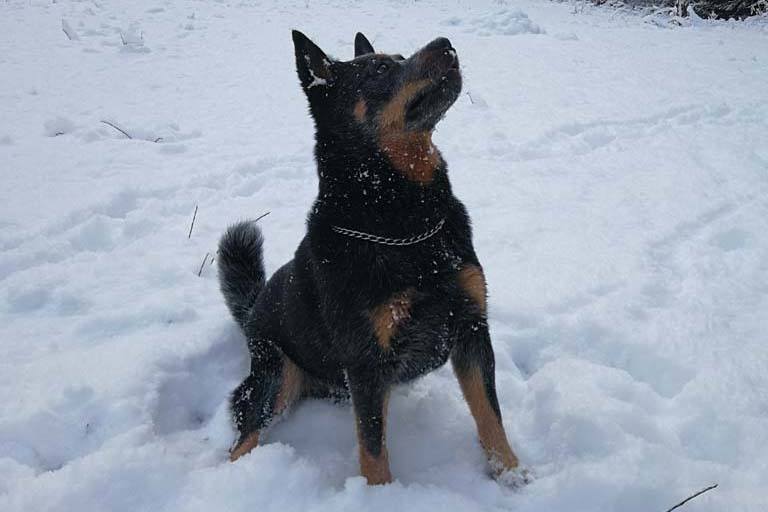 Discover the history, temperament and characteristics of this tough Aussie breed

With our Aussie connections, we were drawn to our Christmas sit, partly because like us, the homeowners were an Australian / British couple, but also because they had a couple of Aussie Cattle dogs. A breed we are familiar with from our time spent in Australia, but which had eluded us so far on the house sitting circuit.

We would be taking care of two dogs for a little over 10 days. Matti was the elder of the two, who at 15 is a bit of a grumpy old lady who needs a lot of love, care and attention. Despite her age and arthritis, she enjoyed a daily stroll to the church and back. She’d demonstrate her love of humans by nestling her head between your legs to get a daily head and rump rub, before settling back on the sofa to sleep the day away. 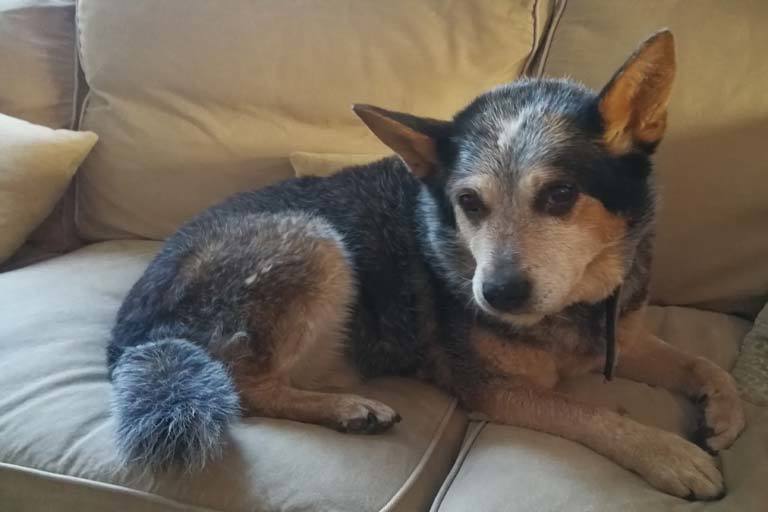 Matti was contrasted by younger, 4 year old Ned who is full of exuberance, and could hardly contain his excitement each morning when we emerged into the kitchen. He lives for exercise and loves to be part of the family.

It was a joy for us to be a part of both Matilda and Ned “Kelly’s” lives for the duration of our snowy Christmas house sit in the French Alps.

This is a compilation of our experience and extra research we've done on Australian Cattle Dogs. We hope it will give you more understanding if you're ever fortunate enough to look after this hardy, but loyal and very intelligent breed.

A breed of many names

Australian Cattle Dogs are also known as Australian Heelers, Blue Heelers, Queensland Heelers and previously, Hall’s Heeler (now with extinct breed status). And if you think you can see the wild look of dingo, you’d be right.

These cattle dogs were all bred originally by crossing with tamed dingos in an attempt to make them more hardy for Australian conditions.

Why a heeler? Well, that came from the fact that these dogs were bred to herd cattle by “nipping” at their heels. It’s something they continue to do, and it was explained to us that our charges may nip gently at times when the herding instinct rises to the fore. We were also told how to stop this behaviour when it emerged.

I think Matti had long forgotten about herding cattle, content instead to herd us up for her daily food rations.

But Ned, when he got excited, could revert to type, and so we’d quickly discourage any nipping. It wasn’t at all aggressive, but we could see that it might be misconstrued if you weren’t aware of the natural behaviour inherent in this breed.

When 19th century settlers created the first large ranches to expand the beef industry in Australia, they found that imported dogs from England were not up to the job of herding the wild, often uncontrollable cattle. It seemed they needed a bit of dingo in them and so an experimental breeding program began.

Different ranchers bred and cross bred the English imported Collies and Smithfield herding dogs with the native Dingo, which was much more suited to the harsh Aussie climate and tough working conditions.

The blue coloured dogs were the popular choice for many Australian ranch owners and drovers, especially in the state of Queensland, hence the name “Blue Heelers” or “Queensland Blue Heelers”.

Australian Cattle Dogs are loyal protectors of their families, but can be initially wary of outsiders. It’s a good idea with these dogs to have a hand-over with the homeowners in situ. Let the dogs get to know you and see that you are accepted into the family. We recommend this for all house sits, but it’s particularly important with breeds that have a protective nature. 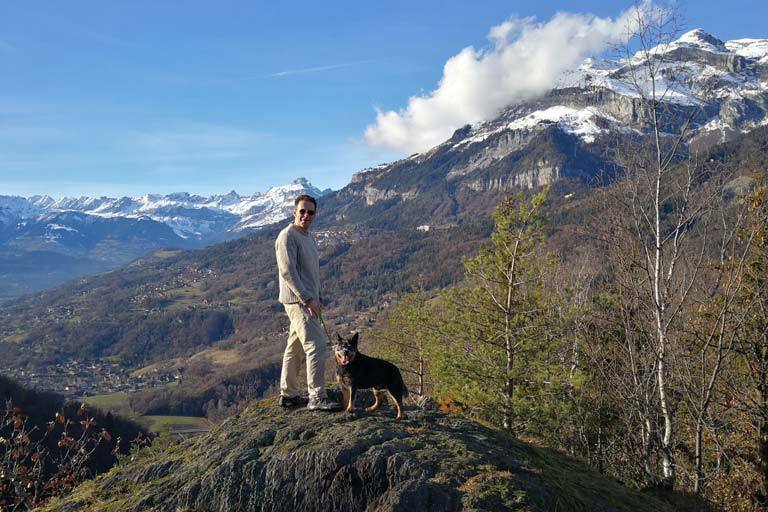 These dogs are highly intelligent and are tough herding dogs bred for endurance and independence. They thrive on having a job and need to be part of the family’s activities. Young dogs need a lot of exercise. We walked and walked through the mountains with Ned and it took a LOT to tire him out! On several occasions it was us rather than Ned that curled up for a sleep on the sofa for a recovery nap!

"Smithfield" dogs were first introduced to Australia in colonial times, after originally being used to work the meat market in Smithfield, London."

This breed does need both mental and physical activity to stay happy and healthy. There were times when we felt like we were the ones being trained! But come evening, Ned would simply snuggle up on the sofa, head on my lap, until sleep silenced everything but the occasional murmer, as his legs continued to run in the mountains, only this time in dreamland.

In Australia this breed is still used to herd cattle. They are high-energy working dogs that want to be active and busy, so it is important to direct their energy appropriately. If you don’t you may find boredom sets in and they will resort to finding their own entertainment. This will quite possibly result in some “naughty” behaviour, chewing, digging or over-excitement. Their wonderful independence can also make them a little stubborn when trying to deter these behaviours.

These dogs often attach themselves to one person in the family, and you may find that one of you as a house sitter becomes the focus of attention. Both Ned and Matti sat by the front door quietly when their owner’s left, appearing to inwardly assess their new situation, before fairly quickly switching allegiance to their new temporary owners. Matti was drawn to me, while Ned saw Ian as his new companion!

With any breed, temperament is affected by many different factors, including heredity, early socialisation and training.

A tendency to bite or nip

Australian Cattle Dogs were bred to herd by force and by biting the heels of cattle. So they have a tendency, or you could say a natural instinct, to chase after and nip at anything that moves. That can involve people, other animals, cars, bikes and in our case, cross country skiers! For this reason we always kept Ned on a leash when around others... just in case.

An adult Australian Cattle Dog that hasn’t been raised or exposed to young children may interact with some roughness. If you are house sitting as a family, this is something to check with the owners in advance.

Fortunately our dogs were well trained and lived in a family environment. We didn’t ever experience an issue when out and about. But it’s something to be aware of, and questions about recall and socialisation should always be asked, as on any house sit, but particularly for this breed.

Generally they are fine with other household dogs, especially if they’ve grown up together. But because of their overly loyal, protective nature, they can exhibit some jealousy or hierarchal problems with other dogs. Again, talking openly with your home-owners, will identify any issues you may need to be aware of.

The male Australian Cattle Dog is between 18 and 20 inches tall, while females stand 17 to 19 inches. Weight ranges from 30 -50 pounds. This is a strong, muscular breed with perky upright ears, and short rough hair.

Our home owners were quick to point out Ned hadn't quite made the grade where size is concerned!

It’s recommended to feed twice a day and not to leave food down for grazing to avoid dogs becoming overweight. As house sitters you’ll be guided by the home owners and you should maintain the feeding regime as they suggest. Remember to ask about permitted treats / dental chews for teeth cleaning. 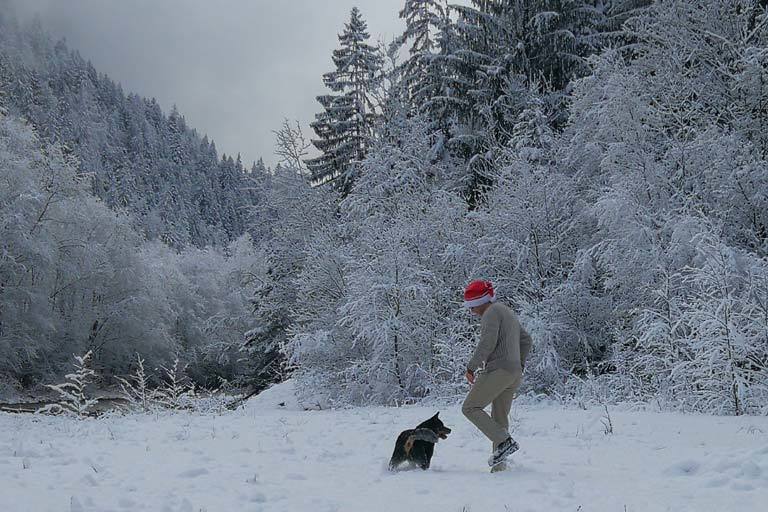 Australian Cattle Dogs have a dense outer coat and a shorter undercoat with rough, straight hair. This makes them very unphased by wet conditions, with their natural water resistant overcoat serving them well.

Nowadays the dogs are bred in two colours – blue and red. They tend to be referred to as “blue” heelers regardless of colour, and the random markings and patterns result in a dog that looks like a mix of both. You’ll often see an area of darker fur over one or both eyes, adding some cuteness to their appearance.

We’ve read conflicting reports as to whether they shed all year round. They certainly seem to have times when they shed considerably over just a few weeks. Don’t be concerned if the undercoat comes away in clumps during these times... this is quite normal.

They don’t require a lot of grooming but occasional brushes will remove dirt and any loose hair, as well as dead hair when they are shedding more prolifically. Ned absolutely loved water. We found him to be one of the easiest breeds we’ve looked after to keep clean. Despite the cold temperatures he would plunge into the ice cold river and roll about in the snow, always in spotless condition by the time we got home.

This is a generally healthy, robust breed, but Australian Cattle Dogs are prone, like most breeds, to particular health conditions, including:

Progressive Retinal Atrophy (PRA) – an eye disease that results in gradual deterioration of the retina causing dogs to become night-blind initially, followed by day time blindness as the disease progresses.

Deafness – an inherited condition that can be tested in young puppies. It’s a known fact that deafness is colour linked, and genes that cause pups to be born white are linked to impaired hearing. Both the red and blue ACD’s are born white, with the exception of solid body or face markings. The red or black hair starts to show from around 4-weeks.

Hip Dysplasia – another inherited condition where the thigh bone doesn’t fit properly into the hip joint. This can cause arthritis in older dogs.

Injuries to watch for

This breed has been raised to be tough. Aussie tough! They can tolerate extreme temperatures, difficult terrain and long working days. This has resulted in dogs that will keep on working even if injured – they are highly tolerant of pain.

It’s doubly important when caring for these dogs that you check regularly for injuries that may need attention.

Takeaways from this house sit

If you're looking after Australian Cattle Dogs you need to be able to give them plenty of exercise appropriate to their age. It’s worth checking to see if your charges need to stay on or off lead on walks. It’s much easier to provide them with the exercise they need if they have somewhere to run freely and safely.

Ask about any nipping behaviour. If the dogs in your care are prone, find out how the owners stop or prevent this. Knowing the commands they use will prevent any confusion when trying to prevent a dog from this unwanted behaviour.

Vanessa & and her partner Ian are full-time British travelers and house sitters who have published the online publication House Sitting Magazine since 2016. They provide numerous resources for the community as they continue their explorations and slow travel adventures across the globe. You can find out more about their house sitting lifestyle at LongTermHouseSitters.com