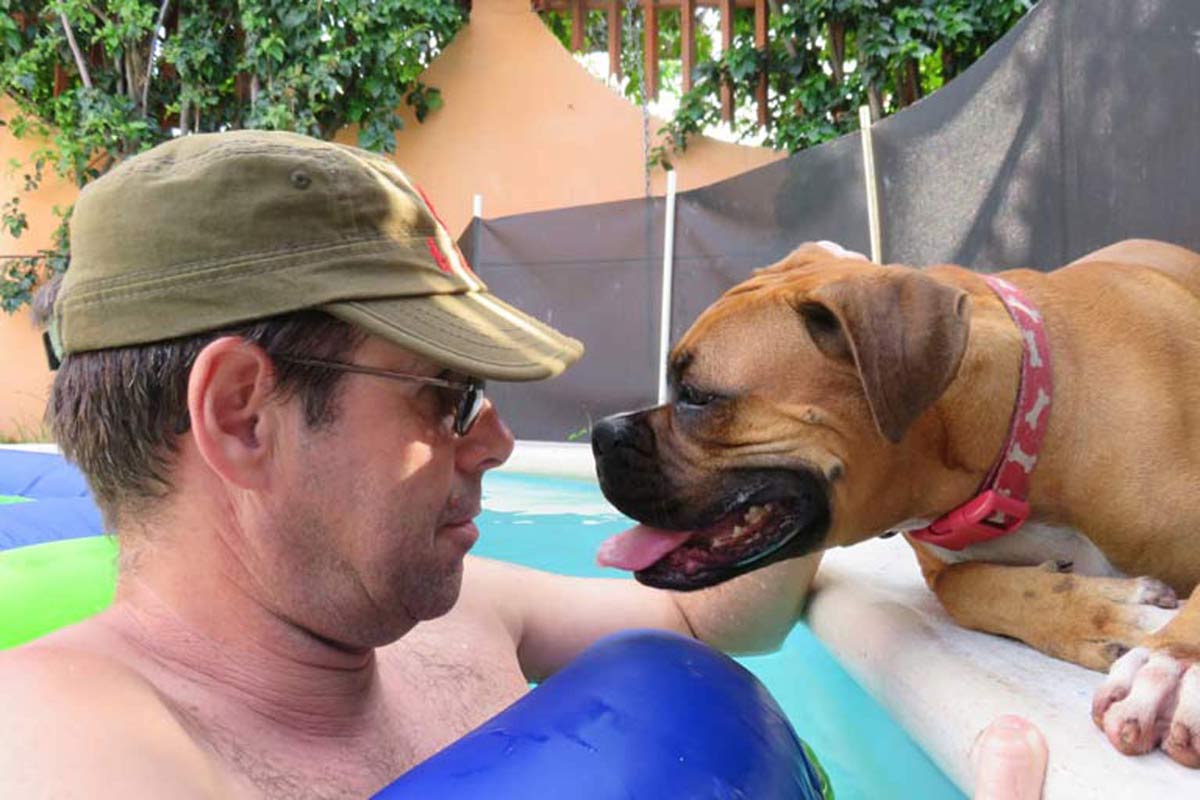 While house sitting in Granada, Nicaragua, we looked after Tabitha (Tabby), a young exuberant Boxer dog. When we applied for this house sit, the home owners had some concerns that anyone would be able to deal with her young and developing "alpha" character.

For this reason we were asked to arrive earlier than normal to make sure that we took to each other, and that we could assert a leadership role with her.

None of us need have worried and it was "love" at first sight for me. I have to admit I'd never been drawn to Boxers in the past, but Tabby changed my mind in an instant. She was the most adorable personality without being at all overbearing. It was easy to spend hours playing with her by the pool and she became a loyal friend to both Ian and I over the month we spent in her company.

Boxers are highly intelligent, obedient (most of the time), funny, endearing and confident - Tabby won our hearts and it was very hard to leave her at the end of the house sit. Fortunately, we've been asked to house sit again in a year or two, so it will be interesting to see her again once she has matured into a young adult!

This month we take a look at the origins of this breed and some of the things you may need to consider if you have the opportunity to house sit with a Boxer.

An introduction to boxer dogs

The Boxer is a medium-sized, short-haired breed of dog with its origins in Germany. Their coats are smooth and tight-fitting. Boxers are descendants of the now extinct German breed, the Bullenbeisser, which was crossed with Mastiff and Bulldog.

The Bullenbeisser was a hunting dog used for centuries to hunt bear, wild boar and deer. Over time their roles changed and they were more commonly found on farms, or as butcher's helpers, controlling cattle in slaughterhouses. 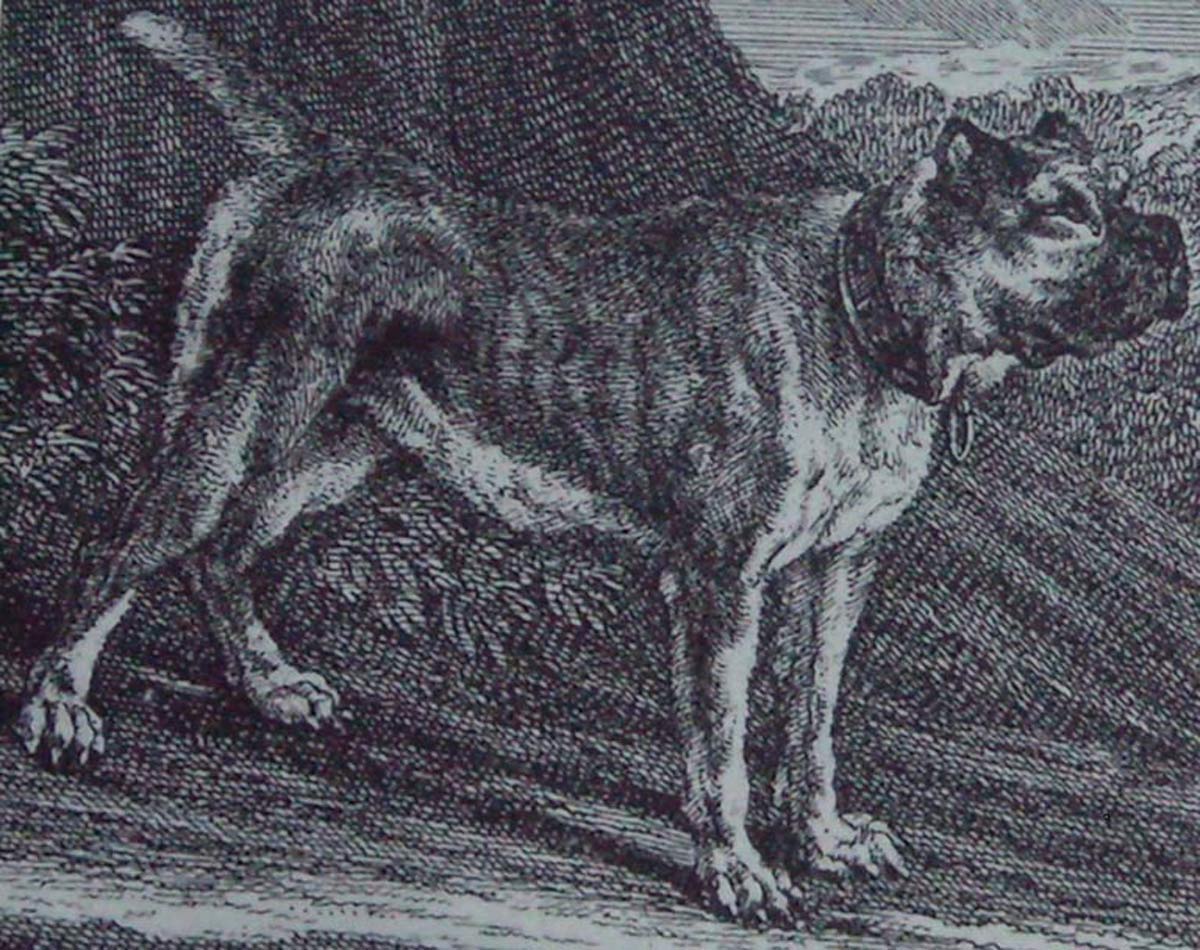 The Boxer we know today was developed in Germany in the late 19th century. George Alt from Munich bred a brindle-colored female Bullenbeisser named Flora with a local dog of unknown origin. In the litter was a fawn-and-white male that was named Lechner's Box.  This is believed to be the start of the line that would become the Boxers we know today.

Boxers often have docked tails and cropped ears. If the ears are not cropped, they will hang down. Nowadays many dog owners are opting to leave their Boxers' ears un-cropped.

They come in a range of colorings, fawn, brindled, and with or without white markings. You'll also find white Boxers, which are not albinos as sometimes thought, as they all have spots of pigmentation somewhere on the body.

White Boxers are prone to sunburn and are associated with a certain amount of deafness. This is caused by lack of pigment cell in the inner ear. The genetic basis of deafness in white boxer is the same as in the Dalmatian. The prevalence of deafness in both ears is approximately 5-8%, and up to 13% can be deaf in one ear. When a dog is deaf in one ear it often goes unnoticed. 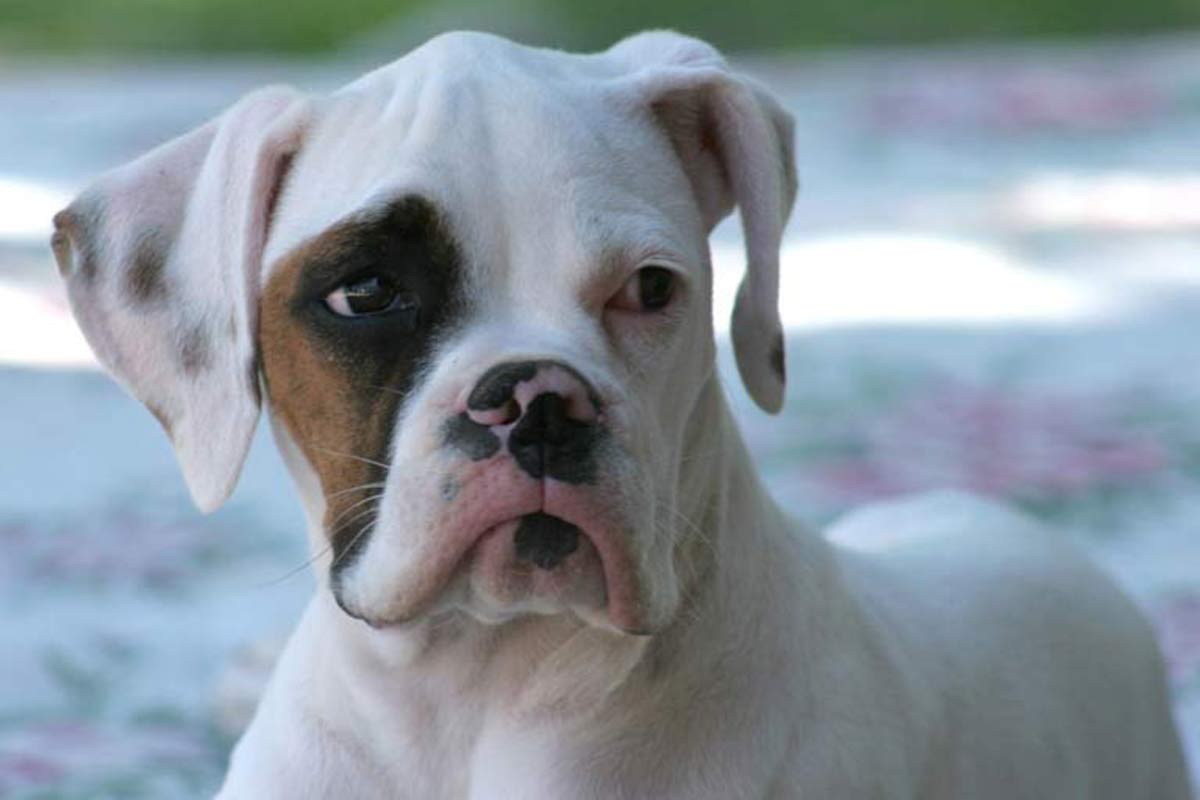 White Boxers do not suddenly go deaf. If they are able to hear at between 4 and 6 weeks the chances of them going deaf is the same as with any other dogs. (source: West Coast Boxer Rescue)

Size and weight of Boxer dogs

Boxers are large, muscular, square headed dogs who can appear imposing. They aren't considered fully mature until they are three years old, which is quite a lot later than many other breeds.

Boxers are intelligent, alert and fearless while remaining friendly, loyal and playful. As family pets they display patience and gentleness with children, but can sometimes be over boisterous with toddlers. But give them plenty of physical exercise and mental stimulation, and they will be great family companions.

They can initially be distrustful of strangers, but are unlikely to show any aggression unless they perceive a real threat to their family.

Boxers are often so loving that they think they are lapdogs and will try to lie as close to you as possible. Tabby was so funny in the evenings as she would try to maneouvre herself onto the sofa with me one limb at a time.

She was not allowed on the furniture but it didn't stop her trying in an attempt to cuddle up each evening. She settled eventually by lying as close as possible and wrapping herself among my legs and feet!

Boxer dogs are high-spirited, happy, and energetic. When they are excited, they contort their body into the shape of a "kidney bean," and perform a little dance that involves twisting their bodies into a semi-circle, and turning in circles. Every morning when we awoke we were given this unique display as Tabby showed us how happy she was that we'd woken to be part of her day.

They also make strange noises occasionally, as if they are trying to talk to you or give you feedback. Huffs were particularly common when Tabby wanted to show her displeasure! 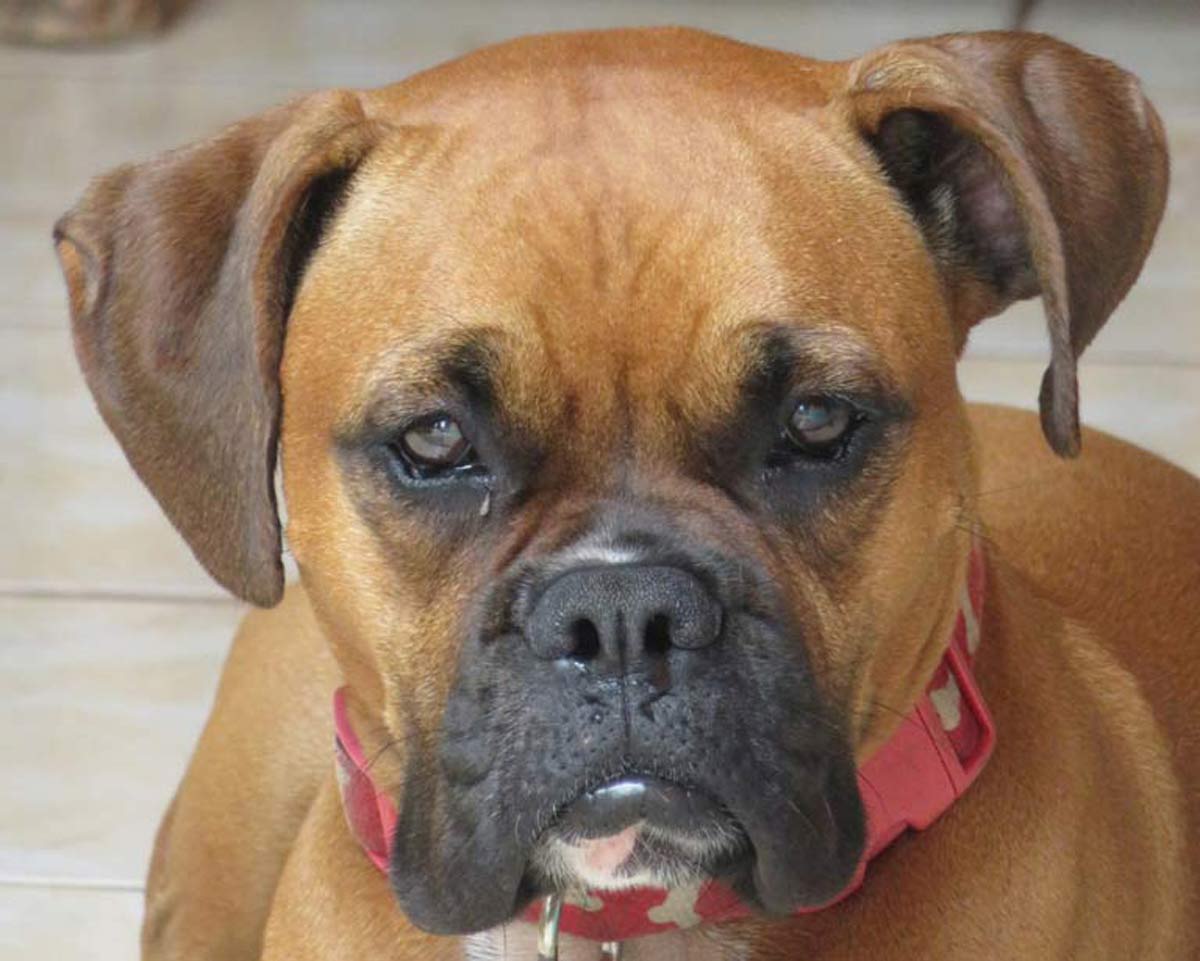 Training is essential for the Boxer. As a big, strong dog, they can accidentally knock people over if they haven't learned to control their exuberance.

Tabby had been trained well from a puppy and was one of the most obedient dogs we'd come across. She knew her boundaries well, although this didn't stop her trying it on a couple of times when her owners first her in our care! To counter this we had to maintain exactly the same level of authority as her owners.

Boxers need constant leadership but they are intelligent and respond well to firm but fun training. They can have a headstrong, independent, and sometimes stubborn nature too, and really don't like to be bossed around or treated harshly. Make training fun and you'll be sure to succeed.

A Boxer will notice any time you let him get away with something, and he'll push to see what else he can get away with. 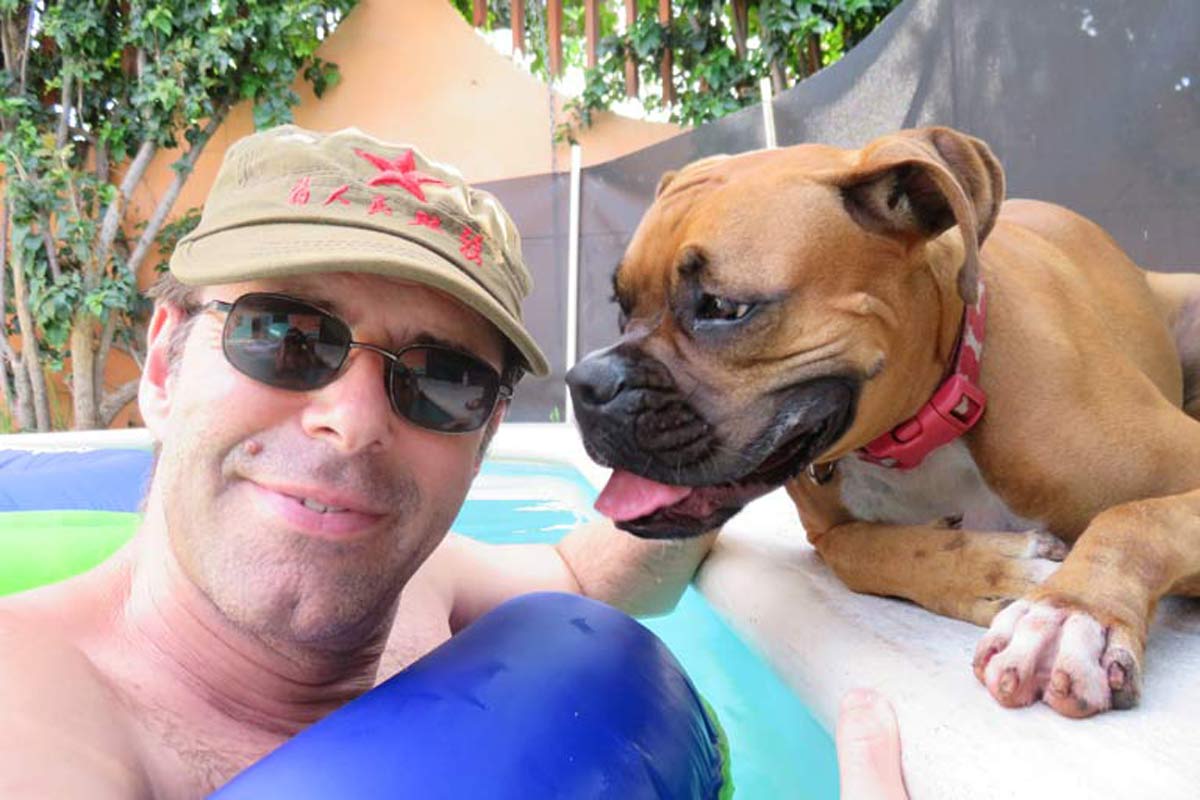 When specifically trained for guard work, Boxers make excellent watchdogs and will restrain an intruder in the same manner as a Mastiff. Because of their strength and courage, they are also widely used in the military and the police, and also for search-and-rescue work.

Boxers "need" to be around their family. If you shut them away on their own they can become bad tempered and destructive.

They are generally only ever aggressive in defence of their family and home. They do, however, need early socialization to ensure that this natural defensiveness is properly directed to only real situations of threat.

There is also a risk of potential aggression toward other dogs (usually of the same sex). Tabby lived in an area of Granada where many strays wandered in packs, so we had to keep her on a lead and carry a stick to ward of any attempts to interact with her aggressively by some of these less socialized dogs.

Although they have short hair, Boxers can shed quite a bit, especially in the spring. A weekly brushing will help keep hair under control. Their short hair makes it easy to spot or feel for ticks. Make sure too that ears and eyes are kept clean with no discharge.

Other grooming includes dental hygiene and nail care as well as bathing as necessary. Check with your home owner to see what the normal routine is and what they would like you to do while they are away.

If you're willing and able to provide them with adequate exercise in the form of walks or runs, they can even adapt to apartment living, so long as they are able to be close to their beloved family.

Boxers are high-energy dogs and do need a lot of exercise to keep their muscles toned. We spent a lot of time playing in the yard each day with Tabby, throwing toys for retrieval and also walking her outside.

If you are looking after Boxers in a hot climate, as we were in Nicaragua, it's important to know that they are more susceptible to heatstroke than most other dog breeds. Early morning or in the cool of the evening is a better time for walks. 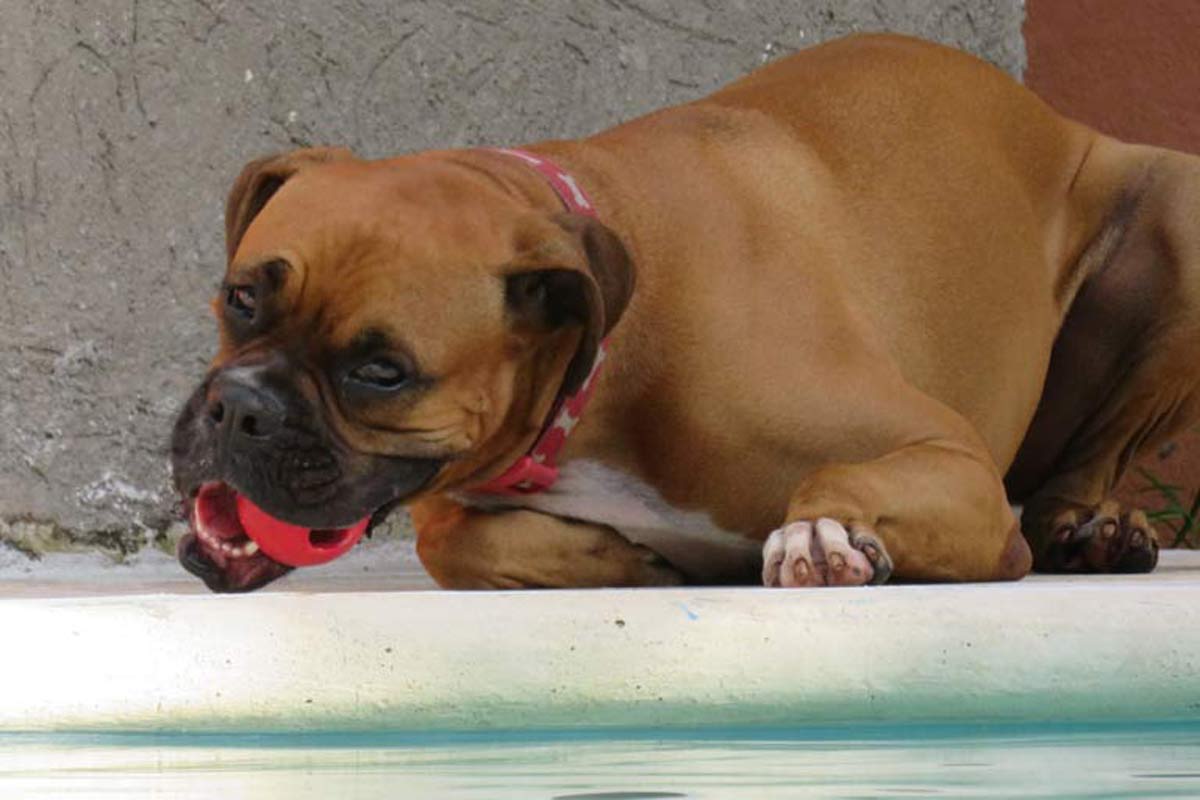 Ideally they should be walked twice a day for around half an hour each time. They love to play. You can't ignore a Boxer - they don't like long periods alone. Take this into consideration if house sitting Boxer dogs.

We were left dry food (Kibble) for Tabby and "human" food was to be avoided. Although she did enjoy sharing a fresh coconut with us most days. She also had "treats" for when she was especially well behaved or showed a level of obedience or intelligence that warranted a special reward.

What to consider when house sitting with boxers

If you are house sitting for Boxers then you shouldn't really experience any particular difficulties. You may need to assert alpha leadership to control a young Boxer, but this is something you can discuss with the pet owner when organizing the assignment.

By understanding more about the breed, you will naturally know what type of questions you need to ask.

Dog sitting in the tropics – what you need to know 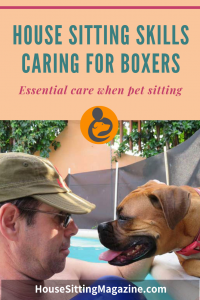 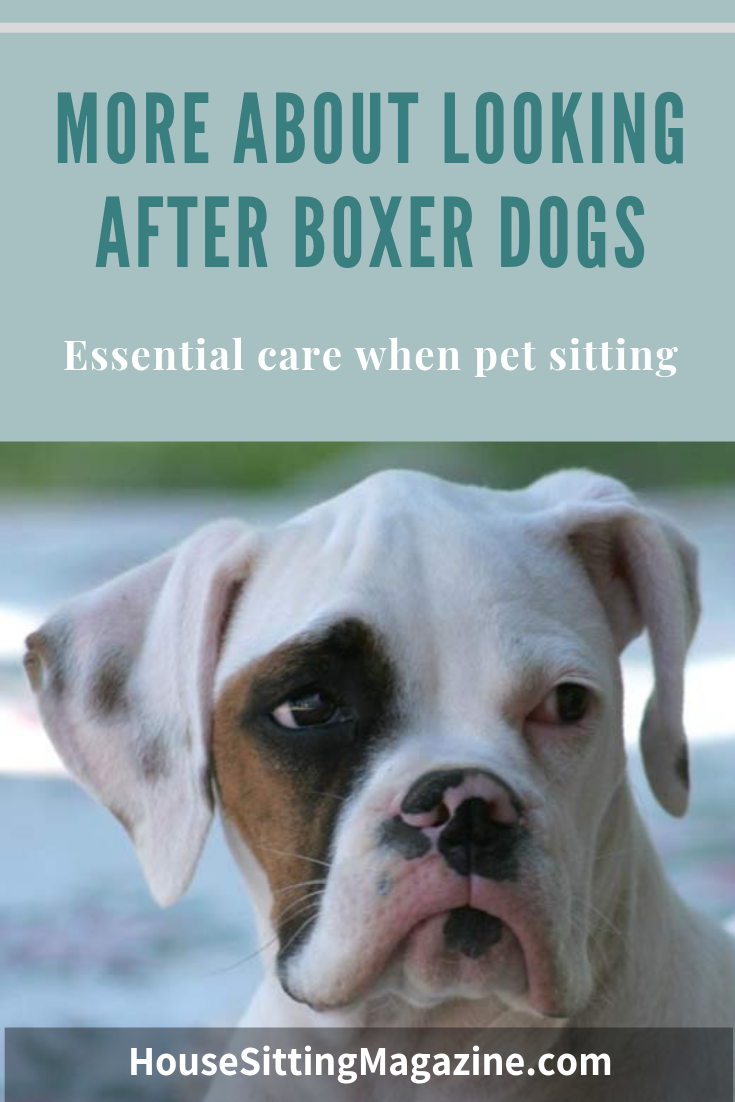