Discover the magic of Mexico City 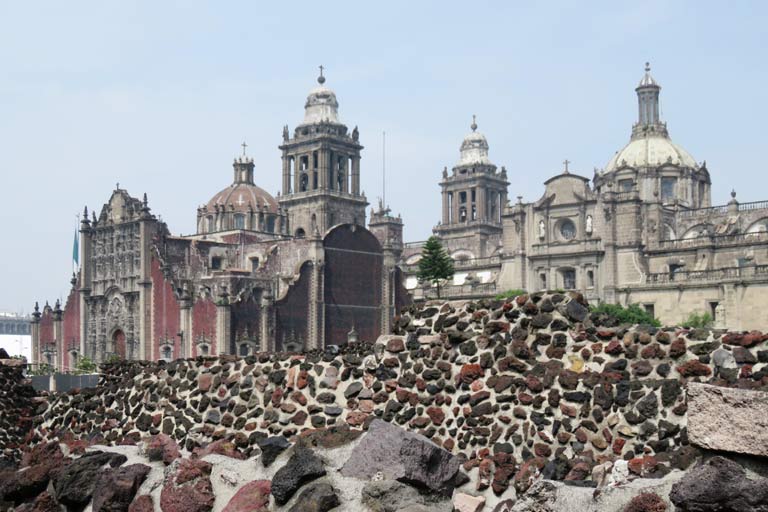 Mexico City had not been high on my bucket list, but necessity meant we had to pass through when traveling from the Yucatan to start a long term house sit in the popular “pueblo magico”, San Miguel de Allende.

What a surprise – it really was love at first sight!

Often confusingly referred to simply as Mexico, or DF (Distrito Federal), the city overflows with historic buildings and churches. Some are in pristine condition, others crumbling with age (and earthquake damage). 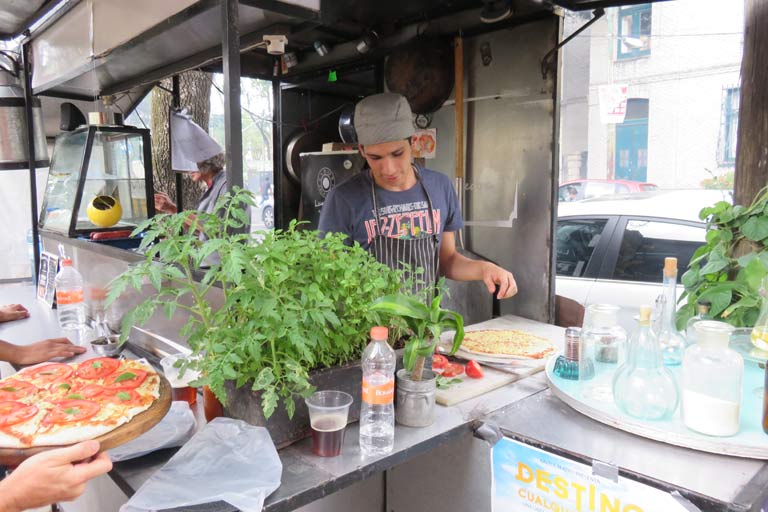 But that’s not all, because as well as shops, bars, cafes and markets, there is a plethora of museums and art galleries, pulsating with cultural treasures and history. There’s even a recently excavated pyramid next to the cathedral. And conveniently the majestic ruins of Teotihuacan can be visited on a day trip just north of the city.

Mexico City should not be overlooked as a tourist destination. It easily rivals London, Paris and New York as a “must see” destination.

Where to stay for city centre sightseeing

Mexico City is big and spreads across several districts. We were planning a number of separate visits so decided to stay in different areas to fully experience the diversity of sights on offer.

There is a great selection of Airbnb properties and we found a small private apartment for the duration of our visit, which facilitated full immersion into the Mexican community.Our initial accommodation was located between the very safe areas of Roma and Condesa. From here we could easily access the Mexico city center by public transport. 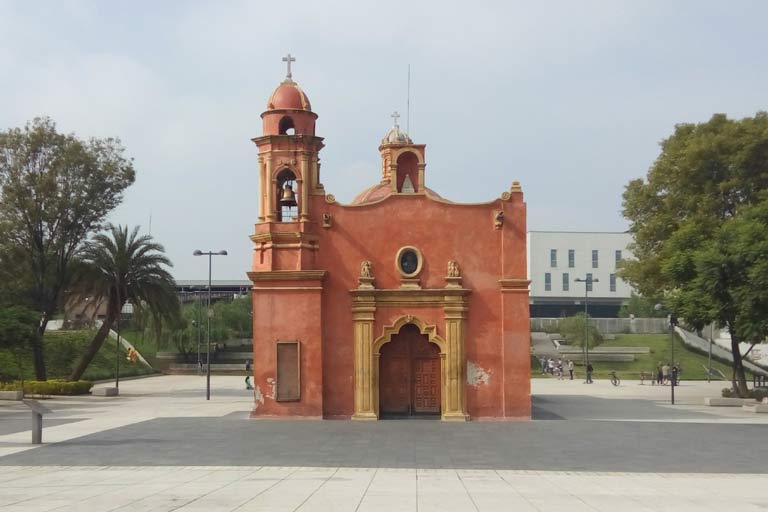 Historic buildings and churches at every turn

The streets are teeming with fashionable, well-dressed middle class Mexicans all enjoying the best that this city has to offer. In fact it was a little too upmarket for us as backpacking travelers, but we were able to sample amazing roadside food as we roamed the streets absorbing the city vibe.

House Sitting in Mexico – House sits are few and far between in Mexico City, but they do come up occasionally. The best websites for Mexican house sits are TrustedHousesitters and HouseSitMexico.

We quickly mastered the subway system, which transports you anywhere in the city for just 5 pesos (around 25 US cents).

At busy peak times, women can take advantage of the “female only” carriages that offer hassle free boarding and more space to sit comfortably. Just make sure that you plan a meet-up with any male companions at your destination platform – it’s easy to lose sight of each other in these crowded stations.

Once seated you’ll be offered a variety of snacks, drinks, or even random acrobatic acts as vendors take advantage of their captive market between stations. We found this all very entertaining and a long, cross city journey generally passed very quickly. 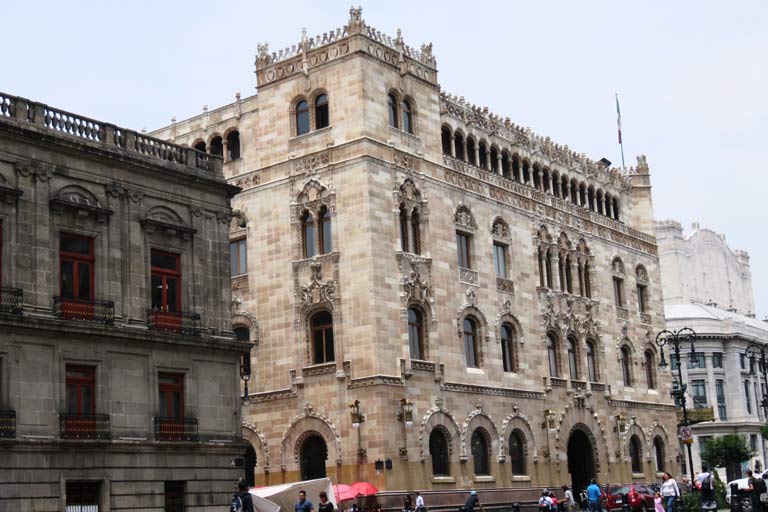 When not using the subway, we simply walked the streets and never once did we feel unsafe. There’s a heavy armed police presence around Mexico City centre, which probably deters a lot of petty crime.

As with large cities anywhere in the world, it’s prudent to take traveler precautions, keeping an eye on bags, money and other possessions. There’s a lot here that can distract you and that’s always when theft is most likely to occur.

Mexico City is a high altitude, densely populated city shrouded by volcanoes and high mountains. Consequently the climate is cooler and much less humid than coastal areas. This makes for comfortable sightseeing even in the summer months.

Winter months can be cold and you will need to dress appropriately. You may even see occasional snow on the tops of the mountains.

What to see in Mexico City’s historic centre

A visit to Mexico City “centro” area is not to be missed. There are many historical, cultural, and architectural monuments to choose from. If you enjoy this type of sightseeing, you really could spend days exploring.

The ancient Mayan and Aztec history is not only fascinating, but it’s also full of rich colors and creative inspiration. My camera was put to optimum use on this visit! 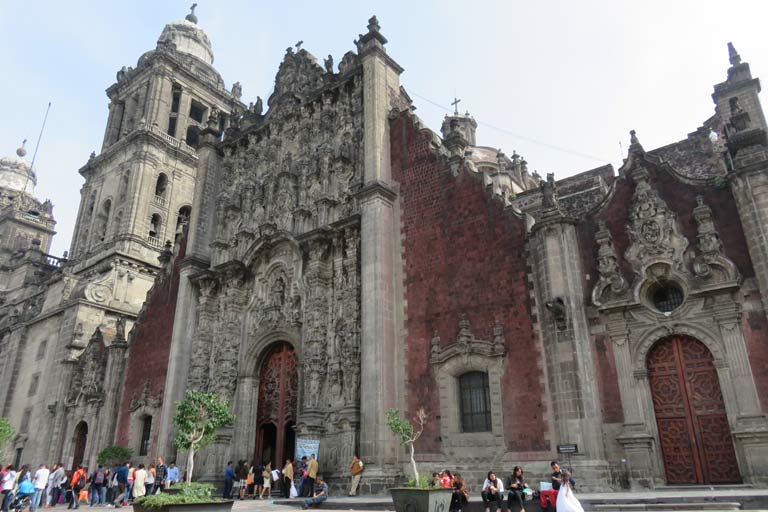 We aimed for the central Zócalo, found ourselves a tourist map and then explored on foot.

Some of our favorite must see sights in Mexico City Centre : 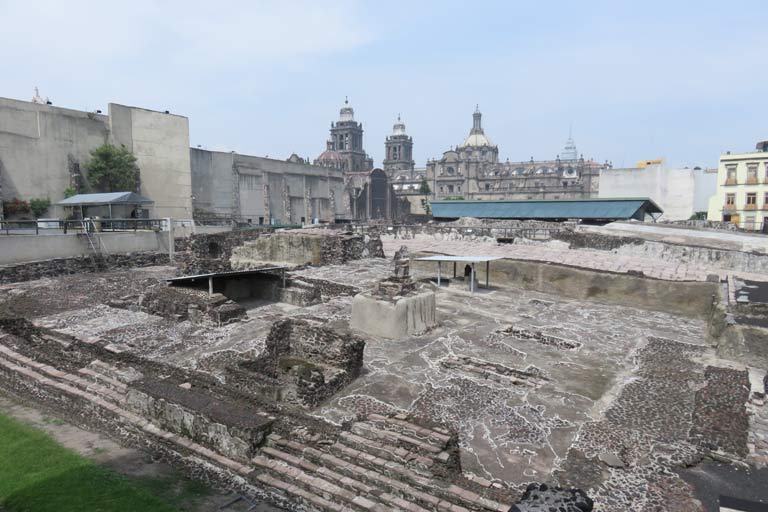 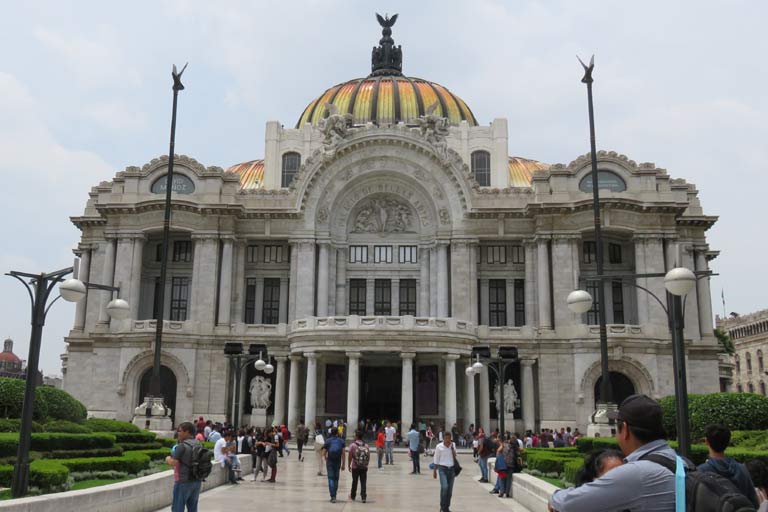 We would also recommend a visit to The Museum of Anthropology. This is the largest and most visited museum in Mexico. You can get to it easily from the Auditorio subway station. It’s close to the zoo and the hilltop Chapultepec Castle, where you’ll also find the city’s History Museum. 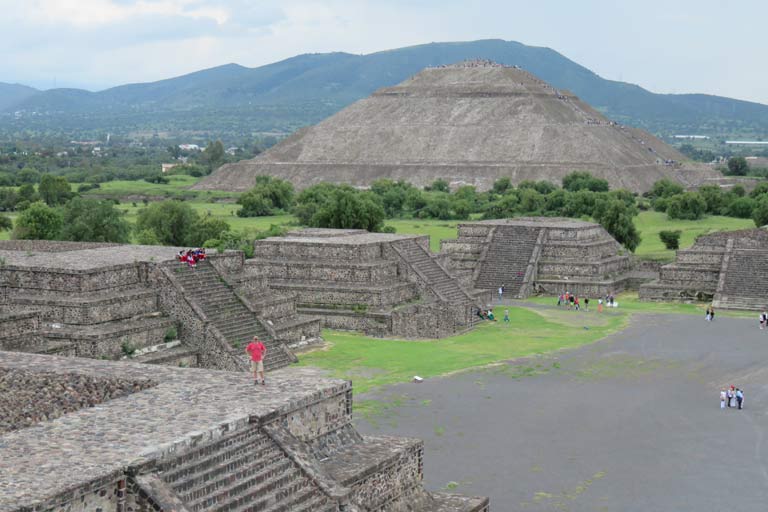 The ruins of Teotihuacan

The ruins of Teotihuacan

A combination of bus and subway took us north of Mexico City to the fascinating ancient Meso-American city of Teotihuacan. We much preferred this and found it far more interesting than touristy Chichen Itza. Here you can still walk to the top of the pyramids – if you have a head for steep steps and heights.

Get the first bus of the day from the bus terminal just across from the subway stop at Autobuses del Norte. This is a modern well organized bus station with many different bus services serving cities all over Mexico. Ask at the information desk for the bus that leaves for “Los pyramides“.

We arrived at Teotihuacan on the first local bus, almost a full hour and a half before the tourist coaches. We were able to stand atop the Pyramid of the Sun, almost without another soul in sight. 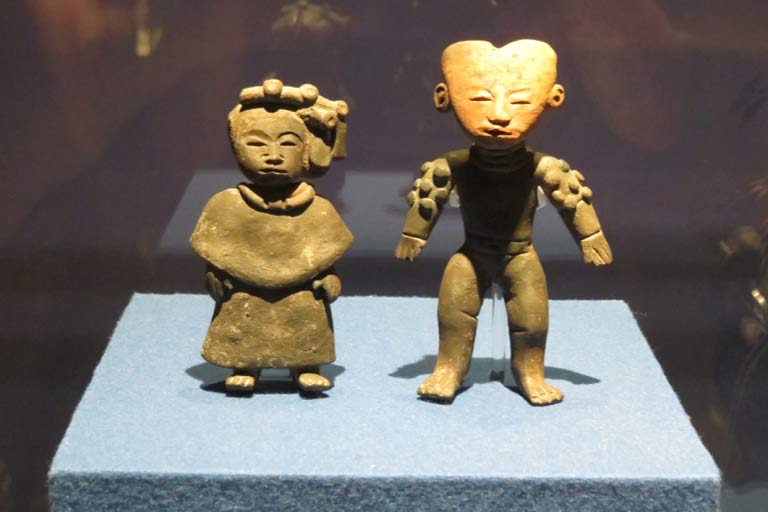 You need 5 or 6 hours to explore this site fully as it extends over a wide area. Don’t miss the museum. If you haven’t had your fill in Mexico City, here’s another collection of amazing artifacts excavated from the ruins.

There are plenty of places to eat outside Gate 2 (directly across from the Pyramid of the Sun). If it’s busy make sure you have lunch early.

Tip: exit the site and then re-enter on the same ticket

For more information about how to visit Teotihuacan without buying joining a tour, take a look at this article: 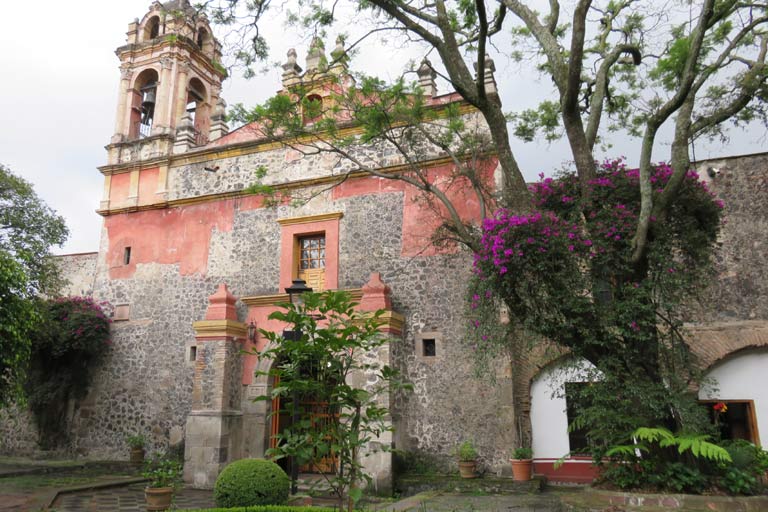 A church hidden behind behind walls, close to our Airbnb

The district of San Angel


On our second visit to Mexico City we elected to stay in the upmarket area of San Angel, once again using Airbnb.

This district has an exclusive feel with pretty, well-maintained, cobbled streets.  The area around the Teatro Lopez Tarso (Performing Arts Theatre) is definitely worth exploring.

The Dominican monastery is also worth a visit – but there is an entry fee. 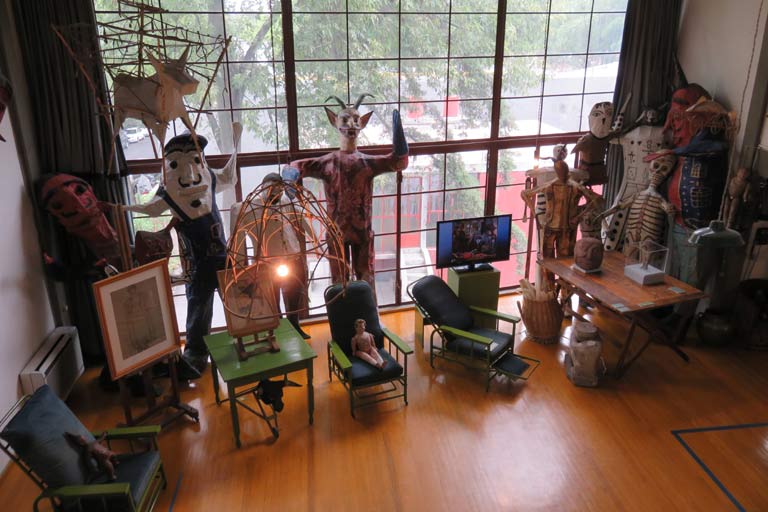 If you haven’t seen the film try to view it before visiting her home and studios – it brings the story alive!

Nearby Coyoacán is home to “La Casa Azul”, the bright blue building on the corner of Londres and Allende, which was Frida’s former home. We arrived early but still had to queue for nearly an hour as entry numbers are restricted. 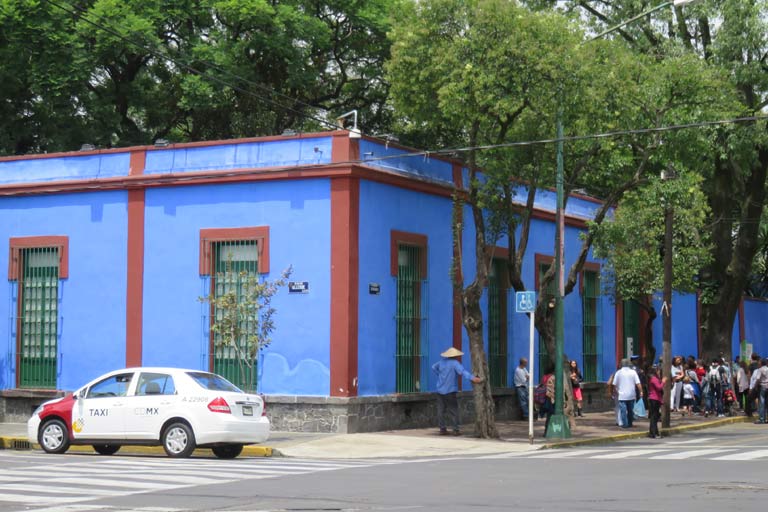 Casa Azul – an interesting museum, providing an insight into the life of Frida Kahlo

“The Blue House” was turned into a museum when Frida died in 1954. It’s home to several pieces of her artwork, and many of her personal possessions. There are also collections of pre-Hispanic art that once belonged to Frida and Diego.

The streets around Frida’s home are very interesting and we spent the day exploring this historic area. It was one of Mexico City’s first neighborhoods to receive the “Barrios Magicos” designation. Not surprising as the tree-lined cobblestone streets, hidden colonial buildings, churches and artisan markets make it a very enjoyable place to spend time walking.

We also took a stroll through the “Vivero Coyoacán” – a large park and home to the city’s nursery. It’s also full of confident demonic-like black squirrels! 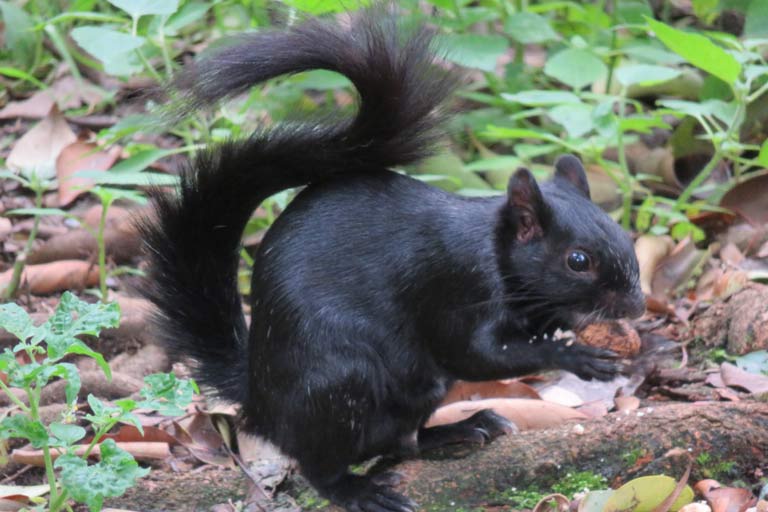 Beware the over-confident black squirrels in the park

A few blocks south of La Casa Azul, Coyoacán’s market is another great find. The culinary brave can sample the “chapulines” (spicy dried grasshoppers) – a delicacy from the state of Oaxaca.

There are also some really good cafes if you need a caffeine fix. El Jarocho reputedly serves some of the best coffee in town. 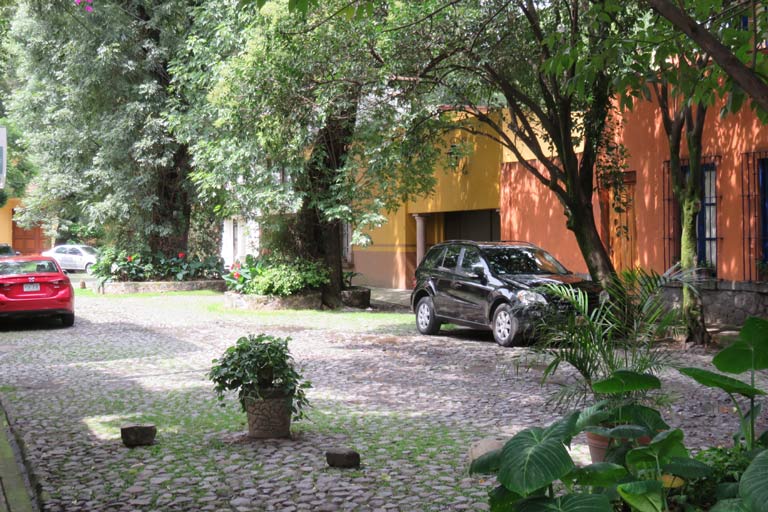 The pretty leafy and cobbled residential streets of Coyoacán

Find Hiquera on the map, and you’ll arrive at one of the best places to eat in Mexico City, the Mercado de Antojitos. This is a large open-air food market where you can eat all kinds of deep-fried snacks, including quesadillas and flautas.

Also take time to visit the Plaza Hidalgo, which is the local’s main gathering place. “Coyoacán” means “place of coyotes” in the Aztec language and you will find here the fountain that features the coyotes that gave this barrio it’s name.

This is just a small sample of the sights available to see in Mexico City. If like us you’ve become mesmerized by this magical city, tell us your favorite place in the comments below!


For further reading about more of the amazing variety of suburbs in Mexico City, this great article on TripHappy.com has lots of information: